The official description, eligibility, criteria, and history of the Somalia Medal. 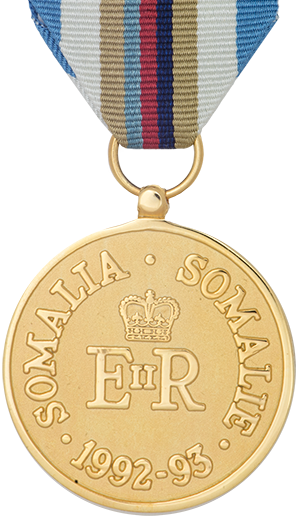 The Somalia medal recognises the participation of CF members that have taken part in the coalition mission in Somalia to help stabilise the country from civil war and help deliver humanitarian aid.

A person enrolled in, attached to, or working with the Canadian Forces may be awarded this medal if the person served a minimum of 90 cumulative days of honourable service in the theatre of operations during the period beginning on 16 November 1992 and ending on 30 June 1993, provided that this service has not been recognized by another medal.

The medal is a circular gold-plated bronze medal, 36 mm diameter:

A 4 mm gold ring, which holds the ribbon, passes through smaller ring attached to the top of the medal.

The ribbon is 32 mm in width and United Nations blue in colour with a central white stripe 22 mm in width, on which are superimposed and centred five stripes: one each of, from left to right, sand, navy blue, scarlet, air force blue, and sand; each stripe being 2.5 mm in width. The blue is the official colour of the United Nations, white is the colour of peace, the sand colour represents the theatre of operations while the dark blue, scarlet, and light blue represent the navy, army, and air force.