The official description, eligibility, criteria, and history of the Star of Courage (SC). 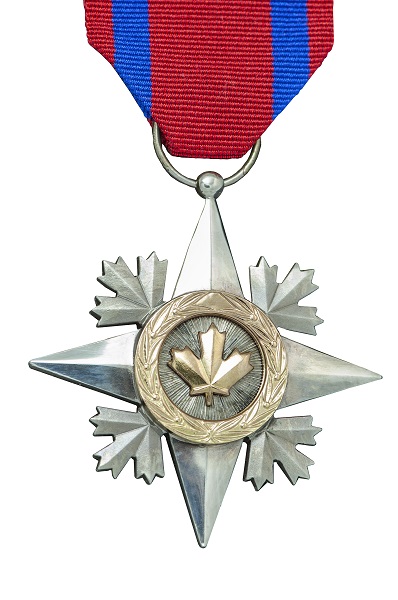 Created in 1972, the Star of Courage recognizes acts of conspicuous courage in circumstances of great peril.

This Honour is administered by the Chancellery of Honours at Rideau Hall.

Military nominations shall be processed through the chain of command in accordance with A-DH-300-000/AG-001 – Canadian Forces Honours Policy Manual.

It is a silver star of four points with a maple leaf in each of the four angles: on the obverse of which, superimposed in the centre, is a gold maple leaf surrounded by a gold wreath of laurel, and on the reverse of which the Royal Cypher and the inscription COURAGE appear.

The ribbon is 32 mm in width, light crimson with two 5 mm blue stripes set 2 mm from the edges.

Each subsequent award of the Star shall be indicated by a gold bar bearing a maple leaf.

The Star shall be worn in the sequence prescribed in the Canadian Orders, Decorations and Medals Directive, and in the following manner: worn on the left breast, suspended from the ribbon described above.

The award of each bar to the Star is denoted by the wearing of a small gold maple leaf device on the undress ribbon.

Recipients are entitled to the use of the post-nominal letters “SC”.

To date, only 461 Star of Courage medals have been awarded.