The official description, eligibility, criteria, and history of the UN Advance Mission in Cambodia (UNAMIC). 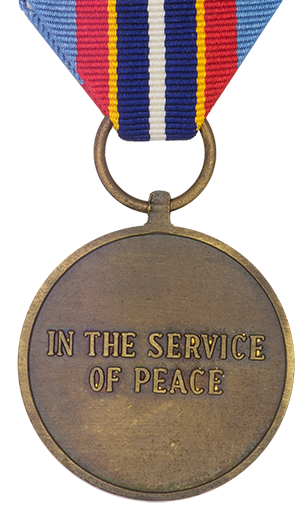 This Mission was established in October 1991 to assist the Cambodian Parties to facilitate communications between the military headquarters of the four Cambodian Parties in matters relating to the cease-fire and to undertake a mine-awareness training role. Subsequently, this mandate was extended to include training in mine clearance and the initiation of a de-mining program. The mandate for this Mission expired in March 1992 with the establishment of the United Nations Transitional Authority in Cambodia.

The ribbon contains a white central stripe flanked by dark blue, gold, and red stripes, representing the Cambodian flags. These are bordered on either side by a band of UN blue.

The medal shall be worn in sequence prescribed in the Canadian Orders, Decorations and Medals Directive, and in the following manner: on the left breast, suspended from the ribbon described above, after the UNPROFOR medal and before the UNTAC medal.