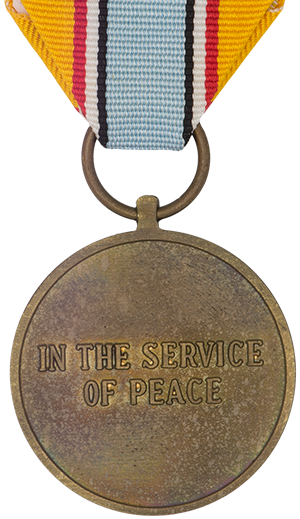 UNAVEM I was to confirm the withdrawal of Cuban troops from Angola and to monitor the cease-fire agreement between the government of Angola and the Union for Total Independence of Angola (UNITA). UNAVEM II began following a peace accord which was signed in Lisbon in May 1991. Canadian officers joined the observers to ensure the final withdrawal of Cuban and South African forces.

The ribbon contains a central broad band of UN blue flanked by three equal stripes of black, white, and red, with wide yellow bands at either end. The yellow, red, and black colours are representative of the Angolan national flag, with white representing the UN presence in the country.

The medal shall be worn in sequence prescribed in the Canadian Orders, Decorations and Medals Directive, and in the following manner: on the left breast, suspended from the ribbon described above, after the UNIKOM medal and before the MINURSO medal.