The official description, eligibility, criteria, and history of the UN Assistance Mission For Rwanda (UNAMIR). 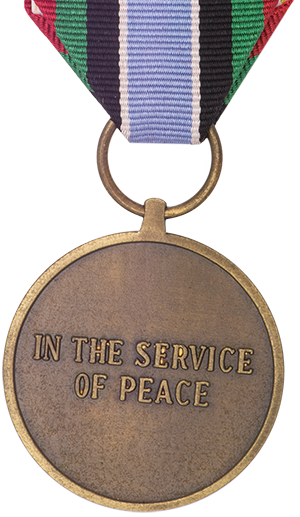 This mission was established 5 October 1993 to monitor the cease-fire, security situation, and process of repatriation of refugees; to assist with mine clearance and the coordination of humanitarian assistance; and to contribute to the security of the city of Kigali. UNAMIR also contributed to the security of International Tribunal for Rwanda personnel and of human rights offices in Rwanda as well as assisting in the establishment and training of a now-integrated national police force. The UNAMIR mandate came to end in March 1996.

The ribbon contains a wide centered stripe of UN blue flanked by a narrow stripe of white and three equal stripes of black, green, and red. The black colour represents the volcanic lava and the world-famous gorillas of the area; green is the colour of the local bush vegetation; red represents the African soil.

The medal shall be worn in sequence prescribed in the Canadian Orders, Decorations and Medals Directive, and in the following manner: on the left breast, suspended from the ribbon described above, after the UNOMUR medal and before the UNMIH medal.