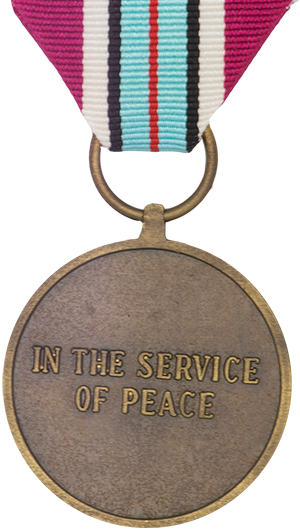 Established in June 1974 to supervise the cease-fire between Israel and Syria, supervise the disengagement (redeployment) of Syrian and Israeli forces, and to establish a buffer zone, as provided in the Agreement on Disengagement between Israeli and Syrian Forces of 31 May 1974. The Mission continues to perform its functions effectively with the cooperation of the parties.

Awarded for 90 days consecutive service between 1 June 1974 to the present.

The ribbon contains a central stripe of UN blue with a red line down the middle representing the UN patrolled Area of Separation. Two narrow stripes of black, representing the volcanic rock of the Golan region, appear on either side, with two narrow bands of white, symbolic of the snow on Mt. Hermon, outside these. At either end are wide bands of burgundy, symbolizing the purple haze at sunset and the native thistles of the Golan.