The official description, eligibility, criteria, and history of the UN Interim Administration Mission in Kosovo (UNMIK). 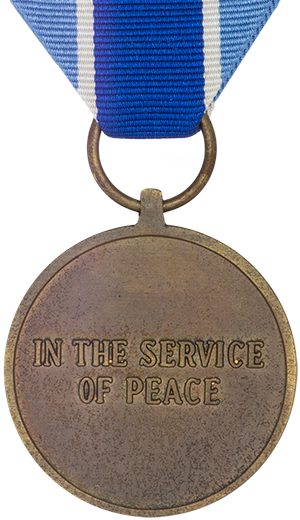 UNMIK was established on 10 June 1999 by adoption of the UN Security Council Resolution 1244. The goal of the mission is the resolution of the grave humanitarian situation in Kosovo through the implementation of return of refugees and prevention of the escalation of conflict between parties in the region.

Awarded for six months consecutive service between 01 June 1999 to the present.

The ribbon has two outer bands of light UN blue, symbolizing the presence of the United Nations. The inner band in dark blue symbolizes the International Security presence and the cooperation and support received from it. The two bands in white symbolize the overall objective to promote peace for all the people in Kosovo.

The medal shall be worn in sequence prescribed in the Canadian Orders, Decorations and Medals Directive, and in the following manner: on the left breast, suspended from the ribbon described above, after the UNMOP medal and before the UNOMSIL medal.