The official description, eligibility, criteria, and history of the UN Interim Force in Lebanon (UNIFIL). 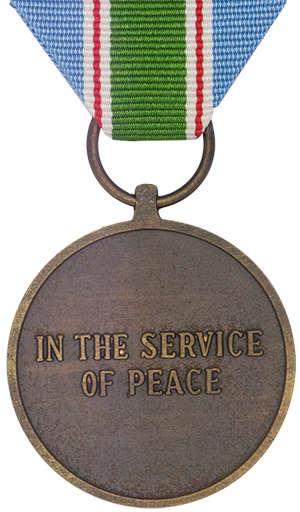 Following the increase of violence along the border between Israel and Lebanon which culminated by the invasion of Lebanon by Israel on 14 March 1978, this Mission was established in March 1978 to confirm the withdrawal of Israeli forces from southern Lebanon, to restore international peace and security, and to assist the Government of Lebanon in ensuring the return of its effective authority in the area.

The ribbon bears three equal bands of UN colour: blue, green, and UN blue. The bands are separated by two equal sized white stripes, each bisected by a narrow red line. The colours represent the UN and Lebanese flags.