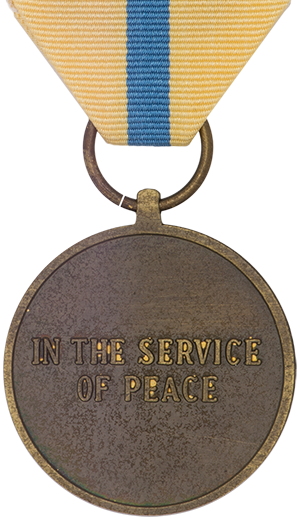 This mission was established in April 1991 to monitor a demilitarized zone established along the boundary between the States of Iraq and Kuwait and the Khor Abdullah and to retrieve non-exploded ammunition and de-mine the area.

Awarded for 90 days consecutive service from 03 April 1991 to present.

The ribbon contains a narrow central stripe of UN blue, surrounded by two broad bands of a buff or desert colour representing Iraq and Kuwait.

The medal shall be worn in sequence prescribed in the Canadian Orders, Decorations and Medals Directive, and in the following manner: on the left breast, suspended from the ribbon described above, after the ONUCA medal and before the UNAVEM medal.