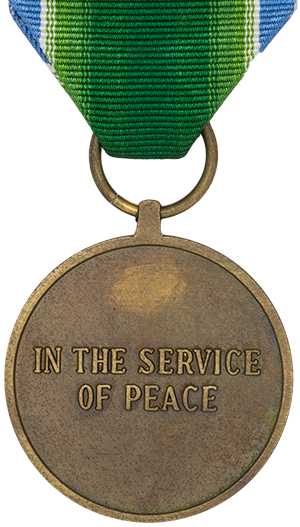 The mission was established in January 1948 to supervise the cease-fire between India and Pakistan in the State of Jammu and Kashmir.

On the reverse, an inscription bearing the words “IN THE SERVICE OF PEACE” in English (and only in English).

The ribbon bears a wide central band in various shades of green to represent the Himalayan Range and the Kashmir Valley, flanked by narrow white stripes representing the snow-capped mountains. Two equal bars of UN blue appear at either end of the ribbon.

The medal shall be worn in sequence prescribed in the Canadian Orders, Decorations and Medals Directive, and in the following manner: on the left breast, suspended from the ribbon described above, after the UNGOMAP medal and before the UNUC medal.