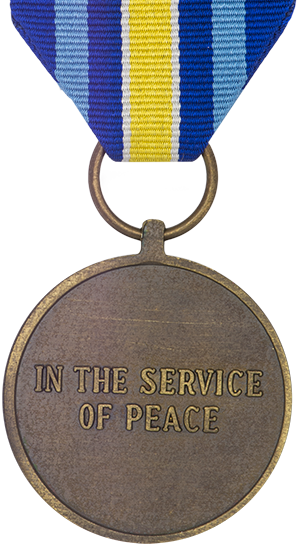 This observer Mission was established in January 1996. The mandate was to monitor the demilitarization of the Prevlaka peninsula in accordance with Resolutions 779 (1992) and 981 (1995).

The ribbon has a dark blue background which represents the waters of the Prevlaka peninsula. The yellow central stripe represents the sun that rises, promising a peaceful and prosperous future. and is flanked by thin white stripes. These are followed on either side by a band of dark blue and UN blue representing peace.

The medal shall be worn in sequence prescribed in the Canadian Orders, Decorations and Medals Directive, and in the following manner: on the left breast, suspended from the ribbon described above, after the UNMIBH medal and before the UNMIK medal.