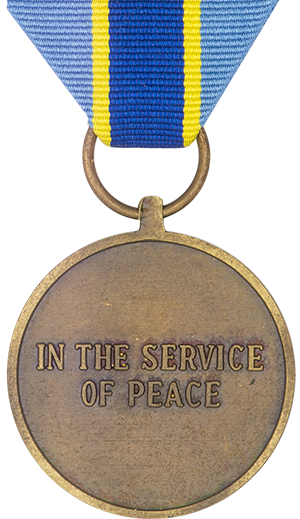 The main goals of the Mission are to monitor the implementation of the Ceasefire Agreement and to investigate violations of the ceasefire, to work with the parties to obtain the release of all prisoners of war, and to supervise and verify the disengagement and redeployment of the parties' forces. As of 1 July 2010, the mission was renamed to reflect the new mandate relating, among other things, to the protection of civilians, humanitarian personnel, and human rights defenders under imminent threat of physical violence and to support the Government of the DRC in its stabilization and peace consolidation efforts.

The ribbon has two outer bands of UN blue, representing the UN presence in the Democratic Republic of Congo (DRC). Inside the two bands, there are two equal bars in yellow, representing the dawn of peace and prosperity. The dark blue in the middle of the yellow represents the Conge river.

The medal shall be worn in sequence prescribed in the Canadian Orders, Decorations and Medals Directive, and in the following manner: on the left breast, suspended from the ribbon described above, after the UNAMET medal and before the UNMEE medal.

According to UN Security Council Resolution 1925 and to reflect the new phase of the mission in this country, the mandate of MONUC ended on 30 June 2010 and that of MONUSCO started on 1 July 2010.