The official description, eligibility, criteria, and history of the UN Mission in Ethiopia and Eritrea (UNMEE). 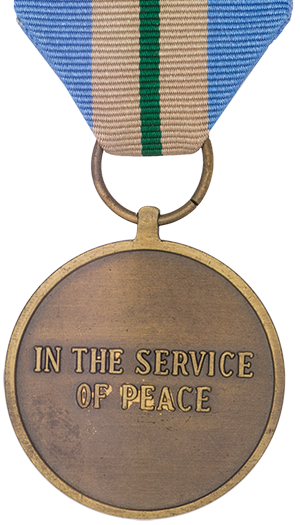 Awarded for 90 days consecutive service between 31 August 2000 to the present.

The ribbon consisting of two outer bands of UN blue, symbolizing the presence of the United Nations. The central stripe of green symbolizes hope and fertility of the land. The two bands in tan symbolize religious freedom and the ruggedness of the country.

The medal shall be worn in sequence prescribed in the Canadian Orders, Decorations and Medals Directive, and in the following manner: on the left breast, suspended from the ribbon described above, after the MONUC medal and before the MINUSTAH medal.