The official description, eligibility, criteria, and history of the UN Operation in Ivory Coast (ONUCI). 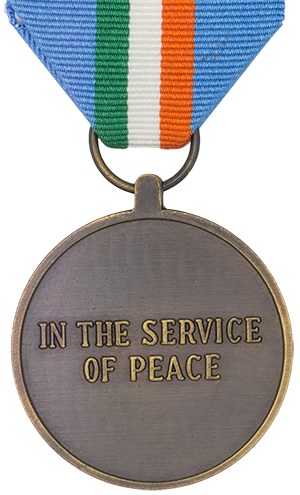 This mission was established under UN Security Council resolution 1528, of 27 February 2004, to monitor the cease-fire and movements of armed groups; support disarmament, demobilization, reintegration, and repatriation and resettlement; protect UN Personnel, institutions, and civilians; support humanitarian assistance and the implementation of the peace process; provide assistance in the field of human rights; restore a civilian policing presence in the country; and re-establish the authority of the judiciary and the rule of law throughout Cote d’Ivoire.

Awarded for 90 days consecutive service between 4 April 2004 to the present.

The ribbon is United Nations blue with three thin stripes grouped together in the centre, from left to right: orange, white, and green.

The medal shall be worn in sequence prescribed in the Canadian Orders, Decorations and Medals Directive, and in the following manner: on the left breast, suspended from the ribbon described above, after the MINUSTAH medal and before the UNMIS medal.