The official description, eligibility, criteria, and history of the UN Organization in Congo (ONUC). 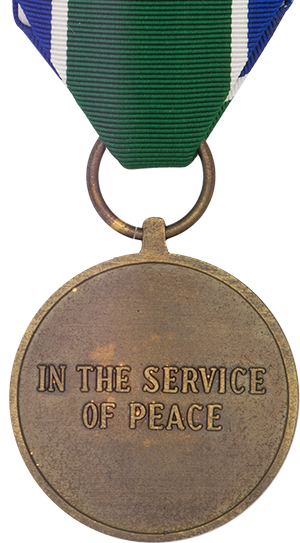 ONUC was established initially in July 1960 to ensure the withdrawal of Belgian forces, to assist the Government in maintaining law and order, and to provide technical assistance. The function of ONUC was subsequently modified to include maintaining the territorial integrity and the political independence of the Congo, preventing the occurrence of civil war, and securing the removal from the Congo of all foreign military, paramilitary and advisory personnel not under the United Nations Command, and all mercenaries. On completion of the mandate, the Mission was withdrawn in June 1964.

The ribbon carries a broad centre band of green, symbolic of hope which was thought to be appropriate for a young nation, and also to represent the Congo Basin. The centre band is flanked by two narrow white bands, representing the UN Mission, and at either end are two bars of UN blue.