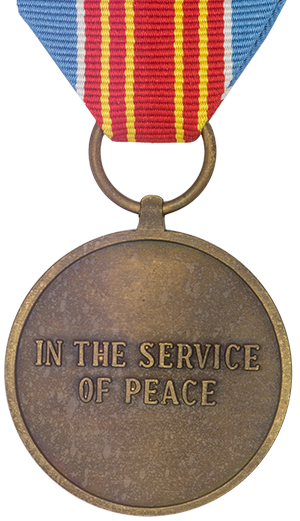 This mission was established in March 1995 which decided that the activities of UNPROFOR, within the former Republic of Macedonia, shall be known as UNPREDEP. The mandate was essentially preventive—to monitor and report any development in the border areas that could undermine the confidence and stability in the former Yugoslav Republic of Macedonia or threaten its territory. The Mission terminated in February 1999.

The ribbon has the UN blue background, representing peace, upon which is a broad red field with yellow bands in the middle bordered by thin white bands, representing the UNPREDEP command presence in Macedonia as well as the flag and coat of arms of that former state (gules a lion Or).

The medal shall be worn in sequence prescribed in the Canadian Orders, Decorations and Medals Directive, and in the following manner: on the left breast, suspended from the ribbon described above, after the MINURCA medal and before the UNMIBH medal.