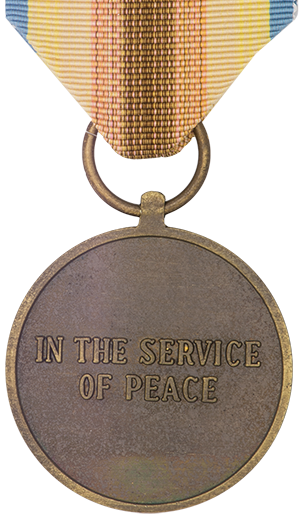 Established in July 1963 to observe and certify the implementation of the disengagement agreement between Saudi Arabia and the United Arab Republic, this Mission ended its activities and was withdrawn in September 1964.

The centre of the ribbon is a wide bar filled with varying shades of brown, indicating the dry and rugged mountainous mass in Yemen, while the lighter shades represent the desert. The centre is flanked by two stripes of UN blue.

The medal shall be worn in sequence prescribed in the Canadian Orders, Decorations and Medals Directive, and in the following manner: on the left breast, suspended from the ribbon described above, after the UNTEA medal and before the UNFICYP medal.