The official description, eligibility, criteria, and history of the United Nations Integrated Mission in Timor-Leste (UNMIT). 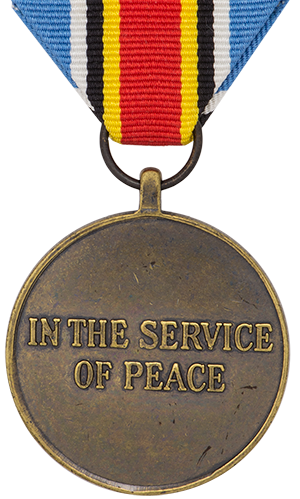 The United Nations Integrated Mission in Timor-Leste (UNMIT) was authorized on 25 August 2006 by UN Security Council Resolution 1704. This mission is to support the Government of Timor-Leste in consolidating stability, enhancing a culture of democratic governance, and facilitating political dialogue among Timorese stakeholders in their efforts to bring about a process of national reconciliation and foster social cohesion.

The ribbon is United Nations blue with a central red stripe flanked with thin stripes of yellow, black, and white.

The medal shall be worn in sequence prescribed in the Canadian Orders, Decorations and Medals Directive, and in the following manner: on the left breast, suspended from the ribbon described above, after the UNMIS medal and before the UNAMID medal.