As stated in the following London Gazette citation, Arthur George Knight is a recipient of the Victoria Cross. This medal is awarded for the most conspicuous bravery, a daring or pre-eminent act of valour, or self-sacrifice or extreme devotion to duty in the presence of the enemy. 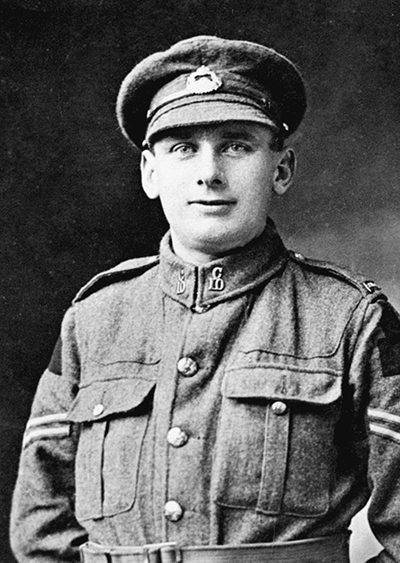 Arthur George Knight was born in Haywards Heath, England on 26 June 1886 and came to Canada in 1911. He enlisted in the Canadian Expeditionary Force (CEF) in December 1914. Knight was sent overseas in 1915, and joined the 10th Infantry Battalion, CEF. In November 1917 he received the Croix de Guerre from the Belgian government.

After taking part in an unsuccessful attack on German positions near Cagnicourt in France on 2 September 1918, Acting Sergeant Knight led a bombing section forward under heavy fire and engaged the enemy with hand grenades at close quarters. Seeing that the way was still blocked, he dashed forward alone, bayoneting several of the enemy, and forcing the remainder to retreat in confusion. When his platoon resumed its advance into the German trenches, Knight spotted a group of about 30 enemy soldiers retire into a deep tunnel leading off the trench. Again, he hurried forward alone to confront the enemy, killing an officer and two non-commissioned officers, and capturing 20 other ranks. Later that day, when the progress of his platoon was checked yet again, Knight single-handedly routed the German defenders. By now seriously wounded, he was taken to the rear for treatment. Knight died of his wounds the following day.

For his exemplary conduct, Acting Sergeant Knight was awarded the Victoria Cross posthumously.

“For most conspicuous bravery, initiative, and devotion to duty when, after an unsuccessful attack, Sjt. Knight led a bombing section forward, under very heavy fire of all descriptions, and engaged the enemy at close quarters. Seeing that his party continued to be held up, he dashed forward alone, bayoneting several of the enemy machine-gunners and trench mortar crews, and forcing the remainder to retire in confusion. He then brought forward a Lewis gun and directed his fire on the retreating enemy, inflicting many casualties.

In the subsequent advance of his platoon in pursuit, Sjt. Knight saw a party of about thirty of the enemy go into a deep tunnel which led off the trench. He again dashed forward alone, and, having killed one officer and two N.C.O.’s, captured twenty other ranks. Subsequently he routed, single-handed, another enemy party which was opposing the advance of his platoon.

On each occasion he displayed the greatest valour under fire at very close range, and by his example of courage, gallantry, and initiative was a wonderful inspiration to all.