As stated in the following London Gazette citation, Aubrey Cosens is a recipient of the Victoria Cross. This medal is awarded for the most conspicuous bravery, a daring or pre-eminent act of valour, or self-sacrifice or extreme devotion to duty in the presence of the enemy. 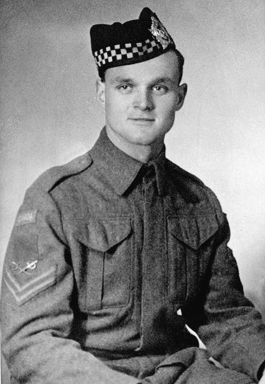 Aubrey Cosens was born in Latchford, Ontario on 21 May 1921. During the Second World War he enlisted in the Argyll and Sutherland Highlanders, but in mid-1944 transferred to the Queen’s Own Rifles of Canada.

Sergeant Cosens was awarded a posthumous Victoria Cross for his bravery and determined leadership in action at Mooshof in Germany on 25 and 26 February 1945. With two tanks in support, Cosens’s platoon twice attacked German strongpoints located in three farm buildings, and was beaten back on both occasions. The platoon was then subjected to a fierce counterattack, during which the platoon commander was killed. Sergeant Cosens assumed command of the platoon, now reduced to himself and four men. As the four other men provided covering fire, he ran across open ground to the remaining serviceable tank and directed its fire on the farm buildings. Having ordered the tank to ram the first building, Cosens entered it alone, killing several of the occupants and making prisoners of the rest. He then continued alone into the second and third buildings, killing or capturing what remained of the enemy. Just after the successful reduction of the strongpoints, Sergeant Cosens was shot through the head by an enemy sniper and killed.

“In Holland, on the night of 25th/26th February, 1945, the 1st Battalion, The Queen’s Own Rifles of Canada, launched an attack on the hamlet of Mooshof, to capture ground which was considered essential for the successful development of future operations.

Sergeant Cosens platoon, with two tanks in support, attacked enemy strongpoints in three farm buildings, but were twice beaten back by fanatical enemy resistance and then fiercely counter-attacked, during which time the platoon suffered heavy casualties and the platoon commander was killed.

Sergeant Cosens at once assumed command of the only other four survivors of his platoon, whom he placed in a position to give him covering fire, while he himself ran across open ground under heavy mortar and shell fire to the one remaining tank, where, regardless of danger, he took up an exposed place in front of the turret and directed its fire.

After a further enemy counter-attack had been repulsed, Sergeant Cosens ordered the tank to attack the farm buildings, while the four survivors of his platoon followed in close support.  After the tank had rammed the first building he entered it alone, killing several of the defenders and taking the rest prisoner.

Single-handed he then entered the second and third buildings and personally killed or captured all the occupants, although under intense machine gun and small arms fire.

Just after the successful reduction of these important enemy strongpoints, Sergeant Cosens was shot through the head by an enemy sniper and died almost instantly.

The outstanding gallantry, initiative and determined leadership of this brave N.C.O., who himself killed at least twenty of the enemy and took an equal number of prisoners, resulted in the capture of a position which was vital to the success of the future operations of the Brigade.”