As stated in the following London Gazette citation, Cecil John Kinross is a recipient of the Victoria Cross. This medal is awarded for the most conspicuous bravery, a daring or pre-eminent act of valour, or self-sacrifice or extreme devotion to duty in the presence of the enemy. 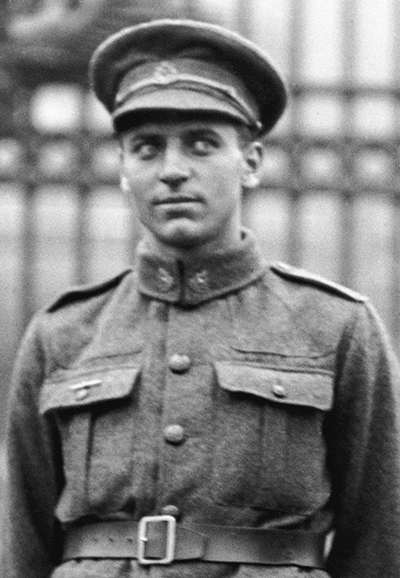 Cecil John Kinross was born in Uxbridge, England on 17 February 1895, and, at the age of 16, came with his family to Alberta to farm. During the First World War he served with the 49th Infantry Battalion, Canadian Expeditionary Force. Before Kinross received the Victoria Cross he had been wounded, but was able to return to his unit within a month.

On 30 October 1917 near Passchendaele in Belgium, Kinross’s company came under intense German artillery and machine gun fire. Carefully surveying the situation, he took off all of his equipment save for his rifle and a bandolier of ammunition, and set out alone over open ground in daylight. Kinross then charged the machine gun, killed the crew of six, and destroyed the gun. Inspired by his action, his company advanced some 300 metres and established itself in an important new position. For his exemplary conduct, Kinross was awarded the Victoria Cross.

Kinross was seriously wounded and did not return to front-line duties. He died in Lougheed, Alberta on 21 June 1957. Mount Kinross, in the Rocky Mountains near Jasper, Alberta, was named in his honour.

“For most conspicuous bravery in action during prolonged and severe operations.

Shortly after the attack was launched, the company to which he belonged came under intense artillery fire, and further advance was held up by a very severe fire from an enemy machine gun. Pte. Kinross, making a careful survey of the situation, deliberately divested himself of all his equipment save his rifle and bandolier and, regardless of his personal safety, advanced alone over the open ground in broad daylight, charged the enemy machine gun, killing the crew of six, and seized and destroyed the gun. His superb example and courage instilled the greatest confidence in his company, and enabled a further advance of 300 yards to be made and a highly important position to be established.

Throughout the day he showed marvellous coolness and courage, fighting with the utmost aggressiveness against heavy odds until seriously wounded.”