As stated in the following London Gazette citation, Charles Smith Rutherford is a recipient of the Victoria Cross. This medal is awarded for the most conspicuous bravery, a daring or pre-eminent act of valour, or self-sacrifice or extreme devotion to duty in the presence of the enemy. 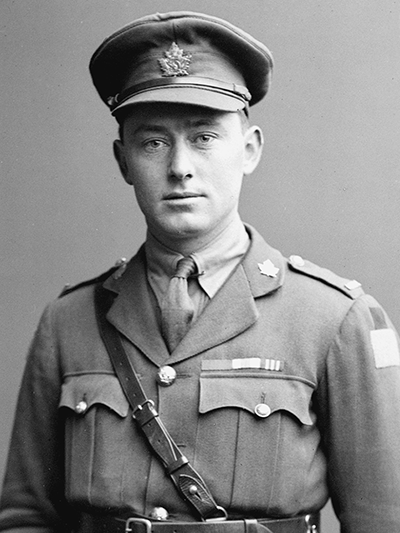 Charles Smith Rutherford was born in Colborner, Ontario on 9 January 1892. He earned the Military Medal at Passchendaele, Belgium, in 1917, and the Military Cross at Arvillers, France in 1918. He earned the Victoria Cross in Monchy-le-Preux, France, 26 August 1918 with the 5th Canadian Mounted Rifles Battalion whilst leading an assaulting party. Finding himself a considerable distance ahead of his men, he noted an enemy party standing before a pillbox ahead of him. Lieutenant Rutherford beckoned, revolver in hand, for them to come to him, and the enemy in return waved for him to come to them. This he did, and by masterly bluff, he informed them that they were surrounded. Incredible, the entire enemy party of 45, including two officers, surrendered to him. Rutherford then persuaded one of the officers to stop the fire of an enemy machine gun nearby. This allowed his own men to advance quickly to his support. Rutherford then captured another pillbox nearby, and another 35 prisoners, as well as a machine gun.

“For most conspicuous bravery, initiative and devotion to duty. When in command of an assaulting party Lt. Rutherford found himself a considerable distance ahead of his men, and at the same moment observed a fully armed strong enemy party outside a ‘Pill Box’ ahead of him. He beckoned to them with his revolver to come to him, in return they waves to him to come to them. This he boldly did, and informed them that they were prisoners. This fact an enemy officer disputed and invited Lt. Rutherford to enter the ‘Pill Box,’ an invitation he discreetly declined. By masterly bluff, however, he persuaded the enemy that they were surrounded, and the whole party of 45, including two officers and three machine guns, surrendered to him.

Subsequently he induced the enemy officer to stop the fire of an enemy machine-gun close by, and Lt. Rutherford took advantage of the opportunity to hasten the advance of his men to his support.

Lt. Rutherford then observed that the right assaulting party was held up by heavy machine-gun fire from another ‘Pill Box.’ Indicating an objective to the remainder of his party he attacked the ‘Pill Box’ with a Lewis gun section and captured a further 35 prisoners with machine guns, thus enabling the party to continue their advance.

The bold and gallant action of this officer contributed very materially to the capture of the main objective and was a wonderful inspiration to all ranks in pressing home the attack on a very strong position.”