As stated in the following London Gazette citation, Christopher Patrick John O’Kelly is a recipient of the Victoria Cross. This medal is awarded for the most conspicuous bravery, a daring or pre-eminent act of valour, or self-sacrifice or extreme devotion to duty in the presence of the enemy. 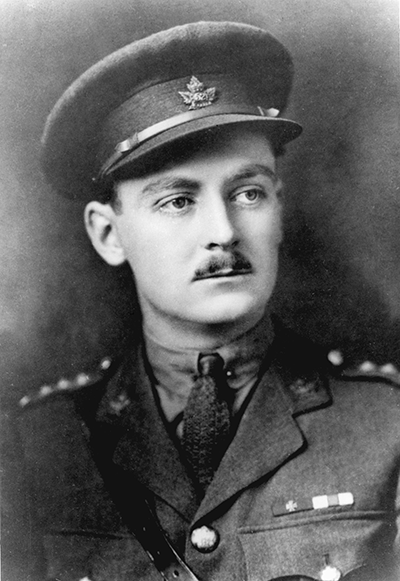 Christopher Patrick John O’Kelly was born in Winnipeg, Manitoba on 18 November 1895. He enlisted in the Canadian Expeditionary Force (CEF) in 1915, and was commissioned as a second lieutenant. While serving with the 52nd Infantry Battalion, CEF, O’Kelly received the Military Cross.

On 26 October 1917, Acting Captain O’Kelly led his company of the 52nd Battalion against German positions on Bellevue Spur, a network of defences near Passchendaele in Belgium. Previously, other units had tried to attack this feature, but had been unsuccessful while suffering considerable losses. O’Kelly and his men advanced about one kilometre into the enemy positions, and captured six “pillbox” fortifications, ten machine guns and 100 prisoners. They then dug in and held their position against repeated German counterattacks until they were relieved. Later that day, O’Kelly and his company fought off another strong enemy counterattack, taking more prisoners in the process. Alert to German activity that night, they captured a raiding party of 11 soldiers. For his exemplary leadership throughout that day, Acting Captain O’Kelly was awarded the Victoria Cross.

On 15 November 1922, O’Kelly was drowned during a storm on Lac Seul, near Kenora, Ontario. His body was never found.

“For most conspicuous bravery in an action in which he led his company with extraordinary skill and determination.

After the original attack had failed and two companies of his unit had launched a new attack, Capt. O’Kelly advanced his command over 1,000 yards under heavy fire without any artillery barrage, took the enemy positions on the crest of the hill by storm, and then personally organised and led a series of attacks against ‘Pill-boxes,’ his company alone capturing six of them with 100 prisoners and 10 machine guns.

Later on in the afternoon, under the leadership of this gallant officer, his company repelled a strong counter-attack, taking more prisoners, and subsequently during the night captured a hostile raiding party consisting of one officer, 10 men and a machine gun.

The whole of these achievements were chiefly due to the magnificent courage, daring and ability of Capt. O’Kelly.”