As stated in the following London Gazette citation, Claude Joseph Patrick Nunney is a recipient of the Victoria Cross. This medal is awarded for the most conspicuous bravery, a daring or pre-eminent act of valour, or self-sacrifice or extreme devotion to duty in the presence of the enemy. 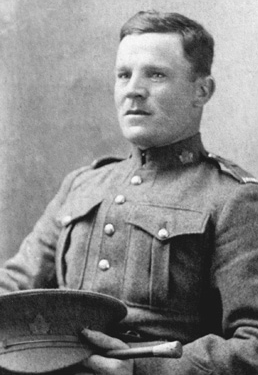 Claude Joseph Patrick Nunney was born in Dublin, Ireland on 24 December 1892, and came to Canada an orphan. He was initially placed in an orphanage in Ottawa, Ontario, and later with a family in nearby Glengarry County. In March 1915 at Alexandria, Ontario, Nunney enlisted in the Canadian Expeditionary Force, and served with the 38th Infantry Battalion. Before winning the Victoria Cross, he had already received the Distinguished Conduct Medal and the Military Medal.

Private Nunney was awarded the Victoria Cross posthumously for the dash and steadfast example he demonstrated on 1 and 2 September 1918 during the fighting at the Drocourt-Quéant Line in France. On 1 September, near Vis-en-Artois, positions recently captured by the Canadians were subjected to a heavy enemy artillery barrage and a counterattack. On his own initiative, Nunney left his company’s main line and went forward through the barrage to its outpost line. Here he went from position to position encouraging his comrades. The next day, Private Nunney’s exemplary conduct helped to inspire his company to carry its objective. Severely wounded on that day, Nunney died on 18 September 1918.

“For most conspicuous bravery during the operations against the Drocourt-Quéant line on the 1st and 2nd September, 1918.

On 1st September, when his battalion was in the vicinity of Vis-en-Artois, preparatory to the advance, the enemy laid down a heavy barrage and counter-attacked. Pte. Nunney, who was at this time at company headquarters, immediately on his own initiative proceeded through the barrage to the company outpost lines, going from post to post and encouraging the men by his own fearless example. The enemy were repulsed and a critical situation was saved. During the attack on 2nd September his dash continually placed him in advance of his companions, and his fearless example undoubtedly helped greatly to carry the company forward to its objectives.

He displayed throughout the highest degree of valour until severely wounded.”