As stated in the following London Gazette citation, Colin Fraser Barron is a recipient of the Victoria Cross. This medal is awarded for the most conspicuous bravery, a daring or pre-eminent act of valour, or self-sacrifice or extreme devotion to duty in the presence of the enemy. 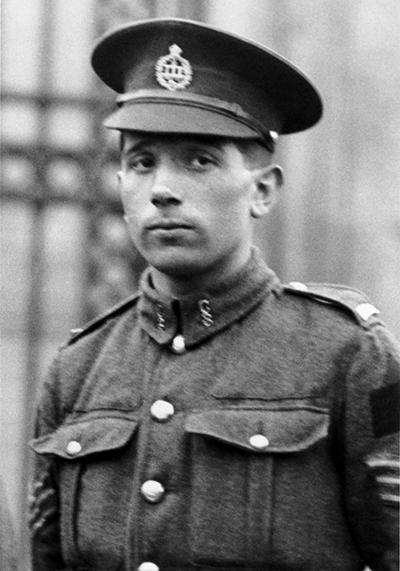 Colin Fraser Barron was born on 20 September 1893 in Baldavie, Scotland. He came to Canada in 1910 and enlisted in the Canadian Expeditionary Force (CEF) in 1914. Corporal Barron earned the Victoria Cross on 6 November 1917 near Passchendaele in Belgium while serving with the 3rd Infantry Battalion, CEF. His unit’s objective was to take a pillbox containing three machine guns at Goudberg Spur since the fortification blocked the line of advance. Taking a Lewis light machine gun, Barron worked his way around the flank of the German position. Alone, he opened fire at point-blank range and rushed the machine guns, killing four of the crew and capturing the remainder. Barron then turned one of the captured machine guns on retreating enemy troops, inflicting heavy casualties. His remarkable individual effort enabled his battalion to continue its advance.

During the Second World War, Barron served with the Royal Regiment of Canada in Iceland and England. He died in Toronto, Ontario on 15 August 1958.

“For conspicuous bravery when in attack his unit was held up by three machine-guns. Corpl. Barron opened on them from a flank at point-blank range, rushed the enemy guns single-handed, killed four of the crew, and captured the remainder. He then, with remarkable initiative and skill, turned one of the captured guns on the retiring enemy, causing them severe casualties.

The remarkable dash and determination displayed by this N.C.O. in rushing the guns produced far-reaching results, and enabled the advance to be continued.”