As stated in the following London Gazette citation, Edward Donald Bellew is a recipient of the Victoria Cross. This medal is awarded for the most conspicuous bravery, a daring or pre-eminent act of valour, or self-sacrifice or extreme devotion to duty in the presence of the enemy. 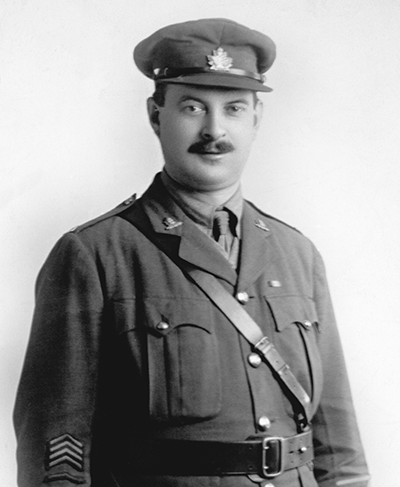 Edward Donald Bellew was born in Bombay, India on 28 October 1882, and came to Canada after serving in the British Army for several years.

Lieutenant Bellew received the Victoria Cross for his actions on 24 April 1915 near Keerselaere in Belgium while serving as battalion machine gun officer with the 7th Battalion, Canadian Expeditionary Force. During a major German attack, he had two machine guns in action on a high feature overlooking the ground across which the enemy was advancing. When the German infantry were less than a hundred meters away, and with his rear also threatened, Bellew and his sergeant resolved to fight it out. Although the sergeant was killed and Bellew had been wounded, he managed to continue firing until the supply of ammunition was exhausted. Before the enemy occupied his position and took him prisoner, Lieutenant Bellew seized a rifle and smashed his machine gun, thus denying its use to the enemy.

“For most conspicuous bravery and devotion to duty near Keerselaere on 24th April, 1915, during the German attack on the Ypres salient. Capt. (then Lieut.) Bellew, as Battalion Machine Gun Officer, had two guns in action on the high ground overlooking Keerselaere. The enemy’s attack broke in full force on the morning of the 24th against the front and right flank of the Battalion – the latter being exposed owing to a gap in the line. The right Company was soon put out of action, but the advance was temporarily stayed by Capt. Bellew, who had sited his guns on the left of the right Company. Reinforcements were sent forward but they in turn were surrounded and destroyed. With the enemy in strength less than 100 yards from him, with no further assistance in sight, and with his rear threatened, Capt. Bellew and Serjt. Peerless, each operating a gun, decided to stay where they were and fight it out. Serjt. Peerless was killed and Capt. Bellew was wounded and fell. Nevertheless, he got up and maintained his fire till ammunition failed and the enemy rushed the position. Capt. Bellew then seized a rifle, smashed his machine gun, and fighting to the last, was taken prisoner.”