As stated in the following London Gazette citation, Edward James Gibson Holland is a recipient of the Victoria Cross. This medal is awarded for the most conspicuous bravery, a daring or pre-eminent act of valour, or self-sacrifice or extreme devotion to duty in the presence of the enemy. 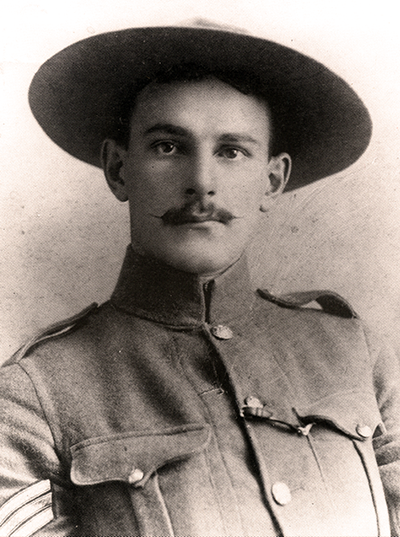 Edward James Gibson Holland was born in Ottawa, Ontario on 2 February 1878, and as a young man joined the 5th Princess Louise Dragoon Guards of the Milita. After the beginning of the South African War (1899-1902) he enlisted in the Royal Canadian Dragoons.

On 7 November 1900, at Liliefontein, near the Komati River, a large force of Boer commandos sought to encircle a retreating British column whose rearguard comprised two troops of Royal Canadian Dragoons and two 12-pounder guns of “D” Battery, Royal Canadian Field Artillery. Sergeant Holland was in charge of a Colt machine gun firing between the two 12-pounders, helping to hold off the Boers. When his machine gun jammed, Holland calmly disconnected the hot barrel, ran and captured a horse, and rode away with the gun under his arm. For his part in saving the 12-pounders and denying the use of his machine gun to the enemy, Sergeant Holland was awarded the Victoria Cross, one of three awarded for separate incidents in this action.

After he returned to Canada Holland received a commission as an officer in his old Militia unit, the 5th Princess Louise Dragoon Guards. During the First World War he commanded a Motor Machine Gun Battery, serving in France with the Canadian Expeditionary Force for one year. Holland died on 18 June 1948 in Cobalt, Ontario.

“Sergeant Holland did splendid work with his Colt gun, and kept the Boers off the two 12-pounded by its fire at close range. When he saw the enemy were too near for him to escape with the carriage, as the horse was blown, he calmly lifted the gun off and galloped away with it under his arm.”