As stated in the following London Gazette citation, Ellis Wellwood Sifton is a recipient of the Victoria Cross. This medal is awarded for the most conspicuous bravery, a daring or pre-eminent act of valour, or self-sacrifice or extreme devotion to duty in the presence of the enemy. 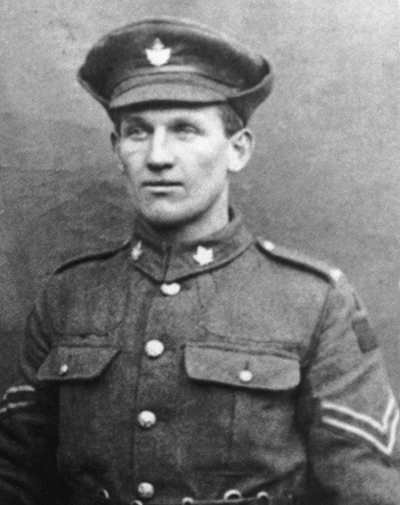 Ellis Wellwood Sifton was born in Wallacetown, Ontario, 12 October 1891. He enlisted in October 1914 and served first as a battalion driver. Sometime before the Vimy battle, he asked to leave this work to “take a chance with the boys in the front line”. On the day of his Victoria Cross action (9 April 1917) with the 18th Infantry Battalion, Canadian Expeditionary Force, Lance-Sergeant Sifton’s company was suffering severely at the hands of enemy machine-gun nests. Sifton dashed through a gap in the wire, ran across open ground and charged a machine-gun emplacement with hand grenades, and attacked the gunners with his bayonet. Having cleared the nest, and with his comrades following behind, Sifton subsequently helped hold off a counter-attack with bayonet and rifle butt. Just as he was about to be relieved, however, he was fatally shot by a wounded German.

“For most conspicuous bravery and devotion to duty.

During the attack in enemy trenches Sjt. Sifton’s company was held up by machine gun fire which inflicted many casualties. Having located the gun he charged it single-handed, killing all the crew.

A small enemy party advanced down the trench, but he succeeded in keeping these off till our men had gained the position.

He was killed just as he returned with the second man.In carrying out this gallant act he was killed, but his conspicuous valour undoubtedly saved many lives and contributed largely to the success of the operation.”