As stated in the following London Gazette citation, Fred Fisher is a recipient of the Victoria Cross. This medal is awarded for the most conspicuous bravery, a daring or pre-eminent act of valour, or self-sacrifice or extreme devotion to duty in the presence of the enemy. 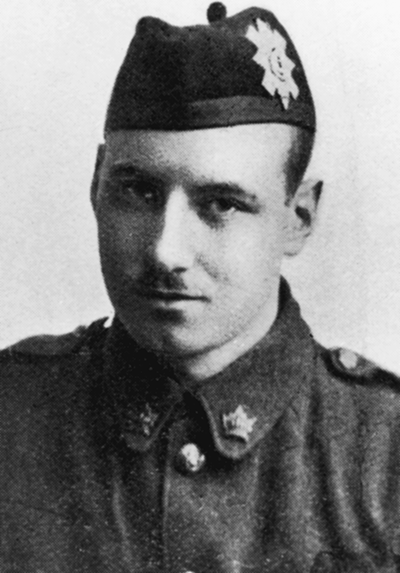 Fred Fisher was born in St. Catharine’s, Ontario on 3 August 1895. His family moved to Montreal, Quebec about 1907, where Fisher was studying Applied Science at McGill University when the First World War began.

On 23 April 1915 Lance-Corporal Fisher was serving in Belgium with the machine gun section of the 13th Infantry Battalion, Canadian Expeditionary Force. Coming up from St Julien that day during the Second Battle of Ypres, he discovered two 18-pounder field guns in danger of being overrun by attacking German infantry. Fisher brought his machine gun into action, and with the help of six other soldiers, held the enemy off until the field guns could be withdrawn. Later the same day he was killed during another attempt to move forward.

For his part in this first major engagement of the war in which Canadian troops were involved, Lance-Corporal Fisher was awarded the Victoria Cross posthumously, and became the first Canadian from a Canadian unit to win the decoration in that conflict.

On 23rd April, 1915, in the neighbourhood of St. Julien, he went forward with the machine gun, of which he was in charge, under heavy fire, and most gallantly assisted in covering the retreat of a battery, losing four men of his gun team.

Later, after obtaining four more men, he went forward again to the firing line and was himself killed while bringing his machine gun into action under very heavy fire, in order to cover the advance of supports.”