As stated in the following London Gazette citation, Frederick George Coppins is a recipient of the Victoria Cross. This medal is awarded for the most conspicuous bravery, a daring or pre-eminent act of valour, or self-sacrifice or extreme devotion to duty in the presence of the enemy. 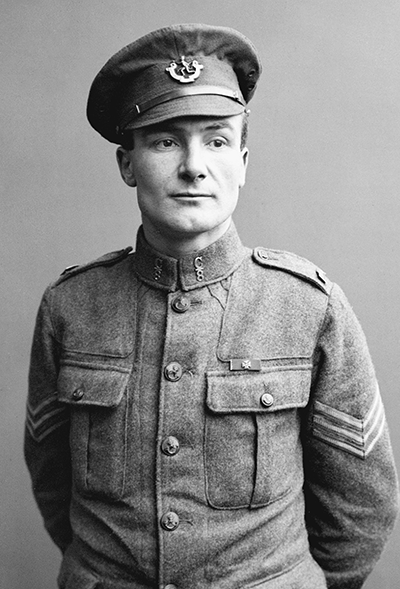 Frederick George Coppins was born in London, England, on 25 October 1889 and served with the Royal West Kent Regiment before emigrating to Canada. After serving for a time in the cavalry, he joined the 8th Infantry Battalion, CEF.

Corporal Coppins earned the Victoria Cross on 9 August 1918 while serving with his battalion east of Amiens. When his platoon unexpectedly came under fire from several German machine guns, it was pinned down and unable to advance or retreat. With no cover available, it was imperative that the enemy machine guns be silenced if the platoon was not to be annihilated. On his own initiative, Coppins called on four men to follow him, and together they attacked the enemy positions. The other four men were killed in the charge, and Coppins was wounded. However, he persisted in the assault and, reaching the machine guns alone, killed four enemy soldiers and took four others prisoner.

“For conspicuous bravery and devotion to duty when, during an attack, his platoon came unexpectedly under fire of numerous machine guns. It was not possible to advance or to retire, and no cover was available. It became apparent that the platoon would be annihilated unless the enemy machine guns were silenced immediately. Cpl. Coppins, without hesitation, and on his own initiative, called on four men to follow him and leapt forward in the face of intense machine-gun fire. With his comrades he rushed straight for the machine guns. The four men with him were killed and Cpl. Coppins wounded. Despite his wounds he reached the hostile machine guns alone, killed the operator of the first gun and three of the crew, and made prisoners of four others, who surrendered.

Cpl. Coppins, by this act of outstanding valour, was the means of saving many lives of the men of his platoon, and enabled the advance to be continued.

Despite his wound, this gallant N.C.O. continued with his platoon to the final objective, and only left the line when it had been made secure and when ordered to do so.”