As stated in the following London Gazette citation, Frederick Maurice Watson Harvey is a recipient of the Victoria Cross. This medal is awarded for the most conspicuous bravery, a daring or pre-eminent act of valour, or self-sacrifice or extreme devotion to duty in the presence of the enemy. 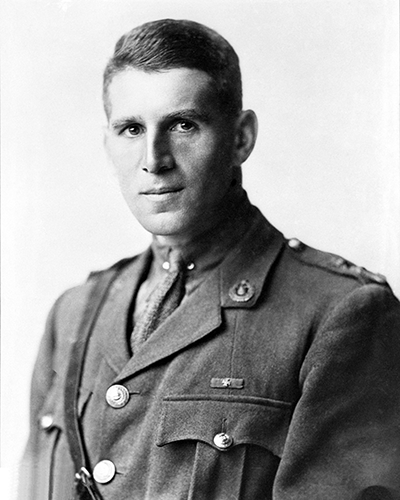 Frederick Maurice Watson Harvey was born on 1 September 1888 in Athboy, Ireland. He came to Canada in 1908 and eventually settled in Medicine Hat, Alberta. During the First World War he served initially in the Canadian Expeditionary Force with the 13th Canadian Mounted Rifles, transferring in November 1916 to Lord Strathcona’s Horse (Royal Canadians).

Lieutenant Harvey earned the Victoria Cross for his conduct on 27 March 1917 in an attack on the village of Guyencourt in France. German soldiers defending the village opened fire with rifles and a machine gun at very close range on Harvey’s leading troop as it advanced, causing heavy casualties. Lieutenant Harvey ran forward well ahead of his men, jumped the barbed wire protecting the enemy position, shot the machine gunner and captured the gun.Harvey later received the Military Cross for his part in the Strathconas charge against German positions near Moreuil Wood on 30 March 1918, the same engagement for which Gordon Flowerdew was awarded the Victoria Cross. The French Government also conferred on Harvey the Croix de Guerre. After the war, he joined the Canadian Army Permanent Force, and in 1938 was promoted to command his regiment. Harvey died in Calgary, Alberta on 21 August 1980.

“For most conspicuous bravery and devotion to duty.

During an attack by his regiment on a village a party of the enemy ran forward to a wired trench just in front of the village and opened rapid rifle and machine gun fire at a very close range, causing heavy casualties in the leading troop.

At this critical moment, when the enemy showed no intention whatever of retiring and fire was still intense, Lt. Harvey, who was in command of the leading troop, ran forward well ahead of his men and dashed at the trench, still fully manned, jumped the wire, shot the machine gunner and captured the gun.

His most courageous act undoubtedly had a decisive effect on the success of the operation.”