As stated in the following London Gazette citation, George Randolph Pearkes is a recipient of the Victoria Cross. This medal is awarded for the most conspicuous bravery, a daring or pre-eminent act of valour, or self-sacrifice or extreme devotion to duty in the presence of the enemy. 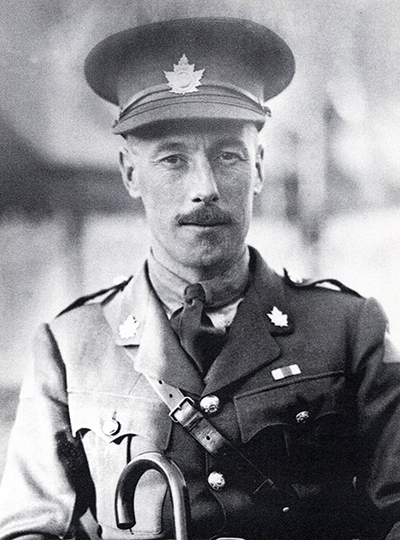 George Randolph Pearkes was born in Watford, England on 26 February 1883. He came to Canada in 1906 and joined the Royal North West Mounted Police. In 1915, he enlisted in the Canadian Expeditionary Force, later rising to command the 5th Canadian Mounted Rifles.

As well as recognizing his courage, the award of the Victoria Cross to Major Pearkes was due to his skilful handling of his troops at Passchendaele in Belgium on 30 and 31 October 1917. At a particular stage, the progress of Pearkes’s troops was threatened by a German strongpoint. Quickly evaluating the situation, he captured the position, which enabled him to continue to advance toward his objective, and then to hold it with a small number of men, despite a wound in the thigh. Although he was wounded five times over the course of the First World War, Pearkes remained a career soldier and went on to hold several major command appointments during the Second World War. After retiring from the Army, he entered federal politics as a Progressive Conservative and was elected four times to the House of Commons (1945, 1953, 1957 and 1958). Pearkes served as Minister of National Defence in Prime Minister John Diefenbaker’s Cabinet from 1957 until 1960. In 1961, he was appointed Lieutenant-Governor of British Columbia, a position he held until 1968. Pearkes died on 30 May 1984 in Victoria, British Columbia. The main building housing National Defence Headquarters in Ottawa, Ontario is named the Major-General George R. Pearkes Building in his honour.

“For most conspicuous bravery and skilful handling of the troops under his command during the capture and consolidation of considerably more than the objectives allotted to him, in an attack.

Just prior to the advance Maj. Pearkes was wounded in the left thigh. Regardless of his wound, he continued to lead his men with the utmost gallantry, despite many obstacles.

At a particular stage of the attack his further advance was threatened by a strong point which was an objective of the battalion on his left, but which they had not succeeded in capturing. Quickly appreciating the situation, he captured and held this point, thus enabling his further advance to be successfully pushed forward.

It was entirely due to his determination and fearless personality that he was able to maintain his objective with the small number of men at his command against repeated enemy counter-attacks, both his flanks being unprotected for a considerable depth meanwhile.

His appreciation of the situation throughout and the reports rendered by him were invaluable to his Commanding Officer in making dispositions of troops to hold the position captured.

He showed throughout a supreme contempt of danger and wonderful powers of control and leading.”