As stated in the following London Gazette citation, Gordon Muriel Flowerdew is a recipient of the Victoria Cross. This medal is awarded for the most conspicuous bravery, a daring or pre-eminent act of valour, or self-sacrifice or extreme devotion to duty in the presence of the enemy. 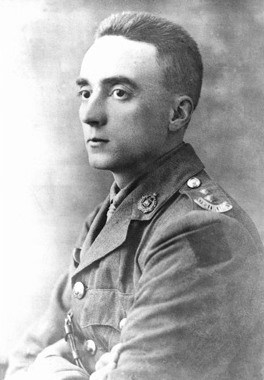 Gordon Muriel Flowerdew was born in Billingford, England on 2 January 1885. As a young man, he came to Saskatchewan in 1903, and later moved to British Columbia. During the First World War he was commissioned as an officer in Lord Strathcona’s Horse (Royal Canadians).

On 30 March 1918 near Moreuil Wood in France, Lieutenant Flowerdew, leading “C” Squadron of the Strathconas, saw two lines of German infantry positions supported by machine guns, one line about two hundred metres behind the other. Flowerdew ordered the squadron to charge. The Canadian cavalrymen passed over both of the German lines, killing many of the enemy with their swords. Wheeling about, Flowerdew led “C” Squadron back over the lines again, which caused the Germans to break and retire. At this point, the squadron had suffered 70 per cent casualties in the charge, including Flowerdew who had been badly wounded. Nevertheless, the survivors managed to establish themselves in the positions formerly held by the enemy, and were able to hold them. Unfortunately,Flowerdew died of his wounds the following day.

Lieutenant Flowerdew’s spirited leadership on this occasion was honoured with the award of a posthumous Victoria Cross.

“For most conspicuous bravery and dash when in command of a squadron detailed for special service of a very important nature. On reaching the first objective, Lieutenant Flowerdew saw two lines of the enemy, each about sixty strong, with machine guns in the centre and flanks, one line being about two hundred yards behind the other. Realising the critical nature of the operation and how much depended upon it, Lieutenant Flowerdew ordered a troop under Lieutenant Harvey, V.C., to dismount and carry out a special movement while he led the remaining three troops to the charge. The squadron (less one troop) passed over both lines, killing many of the enemy with the sword; and wheeling about galloped at them again. Although the squadron had then lost about 70 per cent of its numbers, killed and wounded, from rifle and machine-gun fire directed on it from the front and both flanks, the enemy broke and retired. The survivors of the squadron then established themselves in a position where they were joined, after much hand-to-hand fighting, by Lieutenant Harvey’s party. Lieutenant Flowerdew was dangerously wounded through both thighs during the operation, but continued to cheer on his men. There can be no doubt that this officer’s great valour was the prime factor in the capture of the position.”