As stated in the following London Gazette citation, Harry Brown is a recipient of the Victoria Cross. This medal is awarded for the most conspicuous bravery, a daring or pre-eminent act of valour, or self-sacrifice or extreme devotion to duty in the presence of the enemy. 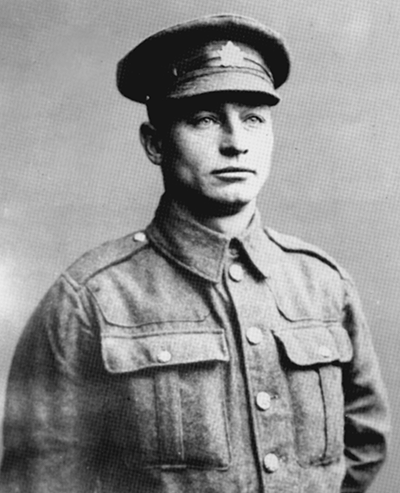 Harry Brown was born in Gananoque, Ontario on 11 May 1898. During the First World War he served with the 10th Infantry Battalion, Canadian Expeditionary Force.

On 16 August 1917, elements of Private Brown’s battalion had advanced to a position around Hill 70, near Lens in France. Holding in the face of repeated German counterattacks, the force found itself with its right flank exposed and all communications to the rear cut. Brown and another soldier were given the task of breaking through enemy lines to reach battalion headquarters in the rear to request reinforcements. While making their way to the rear through an intense barrage, Brown’s arm was shattered and his companion was killed. Nevertheless, he persevered until he arrived at the close support lines where he found an officer. Brown was so weakened that he fell down the steps to the dugout, but remained conscious long enough to communicate the message. He then passed out and was taken to a dressing station where he died a few hours later. For his actions on this occasion, Private Brown was awarded the Victoria Cross posthumously.

“For most conspicuous bravery, courage and devotion to duty.

After the capture of a position, the enemy massed in force and counter-attacked. The situation became very critical, all wires being cut. It was of the utmost importance to get word back to Headquarters. This soldier and one other were given the message with orders to deliver the same at all costs. The other messenger was killed. Pte. Brown had his arm shattered, but continued on through an intense barrage until he arrived at the close support lines and found an officer.

He was so spent that he fell down the dugout steps, but retained consciousness long enough to hand over his message, saying, “Important message.” He then became unconscious, and died in the dressing station a few hours later.

His devotion to duty was of the highest possible degree imaginable, and his successful delivery of the message undoubtedly saved the loss of the position for the time and prevented many casualties.”