As stated in the following London Gazette citation, Harry Garnet Bedford Miner is a recipient of the Victoria Cross. This medal is awarded for the most conspicuous bravery, a daring or pre-eminent act of valour, or self-sacrifice or extreme devotion to duty in the presence of the enemy. 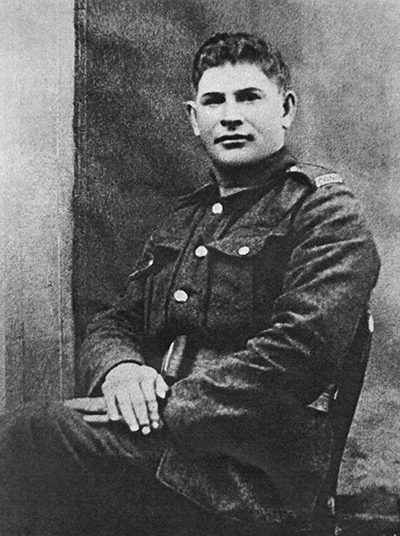 Harry Garnet Bedford Miner was born in Cedar Springs, Ontario on 24 June 1891 and lived on a farm. In December 1915 he enlisted in the 142nd Infantry Battalion, Canadian Expeditionary Force, and was transferred to the 58th Infantry Battalion the following year. Miner received the Croix de Guerre from the French government in recognition of the part he played in operations near Lens in 1917.

Corporal Miner was awarded the Victoria Cross posthumously for his conduct on 8 August 1918, the first day of the massive Allied offensive around Amiens in France. Near Demuin, Miner charged a German machine gun position alone and, after killing the crew, turned the captured weapon on the retreating enemy. Later in the day, with the help of two comrades, he attacked another enemy machine gun emplacement and put it out of action. Again alone, Miner assaulted a German bombing post, dealt with two enemy soldiers with his bayonet, and put the other occupants of the position to flight. It was during this last action that Corporal Miner received severe grenade wounds that proved to be fatal.

“For most conspicuous bravery and devotion to duty in attack, when despite severe wounds he refused to withdraw. He rushed an enemy machine-gun post single-handed, killed the entire crew and turned the gun on the enemy.

Later, with two others, he attacked another enemy machine-gun post, and succeeded in putting the gun out of action.

Cpl. Miner then rushed single-handed an enemy bombing post, bayoneting two of the garrison and putting the remainder to flight. He was mortally wounded in the performance of this gallant deed.”