As stated in the following London Gazette citation, Herman James Good is a recipient of the Victoria Cross. This medal is awarded for the most conspicuous bravery, a daring or pre-eminent act of valour, or self-sacrifice or extreme devotion to duty in the presence of the enemy. 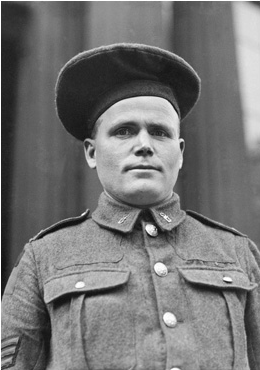 Herman James Good was born in South Bathurst, New Brunswick on 29 November 1887. During the First World War he served in France with the 13th Infantry Battalion, Canadian Expeditionary Force.

On 8 August 1918, the opening day of the attack by the Canadian Corps at Amiens, the advance of Corporal Good’s company was checked by fire from three German machine guns emplaced in Hangard Wood, near Villers-Bretonneux. Good charged the position alone, killing several of the enemy and making prisoners of the remaining defenders. Later that day, when the advance had penetrated deep into the German lines, he came upon an enemy battery of 5.9-inch guns, which was in action. Collecting three men from his section, Good assaulted the battery in the face of point-blank fire and captured the crews of all three guns.

Corporal Good’s actions on this occasion earned him the Victoria Cross. He died in Bathurst, New Brunswick on 18 April 1969.

“For most conspicuous bravery and leading when in attack his company was held up by heavy fire from three machine guns, which were seriously delaying the advance. Realising the gravity of the situation, this N.C.O. dashed forward alone, killing several of the garrison and capturing the remainder.

Later on Cpl. Good, while alone, encountered a battery of 5.9-inch guns, which were in action at the time. Collecting three men of his section, he charged the battery under point-blank fire and captured the entire crews of three guns.”