As stated in the following London Gazette citation, Hugh Cairns is a recipient of the Victoria Cross. This medal is awarded for the most conspicuous bravery, a daring or pre-eminent act of valour, or self-sacrifice or extreme devotion to duty in the presence of the enemy. 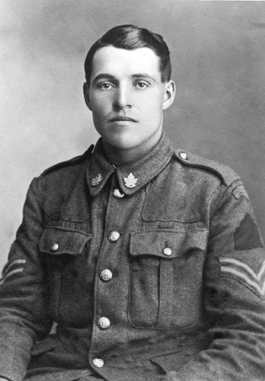 Hugh Cairns was born in Ashington, England on 4 December 1896, and came with his family to Canada in May 1911. During the First World War, Cairns and his two brothers enlisted in the Canadian Expeditionary Force. For his actions in the attack by the Canadian Corps on Vimy Ridge in April 1917, Cairns received the Distinguished Conduct Medal.

On 1 November 1918, while Sergeant Cairns was serving with the 46th Infantry Battalion near Valenciennes in France, a German machine gun opened fire on his platoon as it advanced. Single-handed, he attacked the enemy position and captured the gun, using a Lewis light machine gun to kill the crew. Later, when progress was blocked again, he charged another group of German positions, killing 12 of the enemy and capturing 18 others along with two machine guns. When further resistance was encountered from enemy machine guns and artillery, Cairns, though wounded, led a successful effort to outflank and eliminate the defenders. Cairns’s small party inflicted many casualties and captured about fifty of the enemy and all of their guns. A subsequent patrol in which he participated forced 60 more enemy soldiers to surrender. It was while disarming this group of prisoners that Cairns was wounded again, this time severely. Although he still managed to open fire and kill many of his assailants, he was overwhelmed by about 20 of the other enemy prisoners and collapsed from weakness and the loss of blood. Cairns died the following day.

Sergeant Cairns received a posthumous Victoria Cross for his exemplary conduct in these actions.

“For most conspicuous bravery before Valenciennes on 1st November, 1918, when a machine gun opened on his platoon. Without a moment’s hesitation Serjt. Cairns seized a Lewis gun and single-handed, in the face of direct fire, rushed the post, killed the crew of five, and captured the gun. Later, when the line was held up by machine-gun fire, he again rushed forward, killing 12 enemy and capturing 18 and two guns.

Subsequently, when the advance was held up by machine guns and field guns, although wounded, he led a small party to outflank them, killing many, forcing about 50 to surrender, and capturing all the guns.

After consolidation he went with a battle patrol to exploit Marly and forced 60 enemy to surrender. Whilst disarming this party he was severely wounded. Nevertheless, he opened fire and inflicted heavy losses. Finally he was rushed by about 20 enemy and collapsed from weakness and loss of blood.

Throughout the operation he showed the highest degree of valour, and his leadership greatly contributed to the success of the attack. He died on the 2nd November from wounds.”