As stated in the following London Gazette citation, James Peter Robertson is a recipient of the Victoria Cross. This medal is awarded for the most conspicuous bravery, a daring or pre-eminent act of valour, or self-sacrifice or extreme devotion to duty in the presence of the enemy. 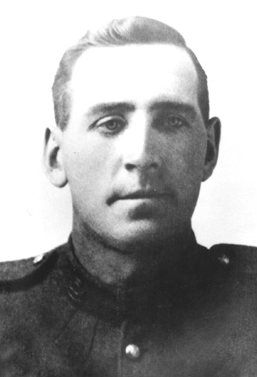 Robertson was born in Pictou County, Nova Scotia on 26 October 1883. As a child Robertson moved with his family first to Springhill, Nova Scotia, then to Medicine Hat, Alberta. He joined the Canadian Expeditionary Force in 1915.

Peter Robertson earned the Victoria Cross during the final assault on Passchendaele, Belgium, 6 November 1917 with the 27th Infantry Battalion. His platoon was held up by barbed wire and a German machine gun. He was able to dash round to an opening on the flank of the enemy position and rush the gun. After a desperate struggle, Robertson killed four of the crew, then turned the enemy gun on the remainder. This enabled his platoon to continue towards its objective, with Robertson still firing the captured gun at the enemy as it retreated. Later when two of his own snipers were wounded in front of their trench, he went out and carried one of them in under severe fire, but when he returned with the second man, he was killed by a bursting shell.

“For most conspicuous bravery and outstanding devotion to duty in attack. When his platoon was held up by uncut wire and a machine gun causing many casualties, Pte. Robertson dashed to an opening on the flank, rushed the machine gun and, after a desperate struggle with the crew, killed four and then turned the gun on the remainder, who, overcome by the fierceness of his onslaught, were running towards their own lines. His gallant work enabled the platoon to advance. He inflicted many more casualties among the enemy, and then carrying the captured machine gun, he led his platoon to the final objective. He there selected an excellent position and got the gun into action, firing on the retreating enemy who by this time were quite demoralised by the fire brought to bear on them.

During the consolidation Pte. Robertson’s most determined use of the machine gun kept down the fire of the enemy snipers; his courage and his coolness cheered his comrades and inspired them to the finest efforts.

Later, when two of our snipers were badly wounded in front of our trench, he went out and carried one of them in under very severe fire.

He was killed just as he returned with the second man.”