As stated in the following London Gazette citation, John Bernard Croak is a recipient of the Victoria Cross. This medal is awarded for the most conspicuous bravery, a daring or pre-eminent act of valour, or self-sacrifice or extreme devotion to duty in the presence of the enemy. 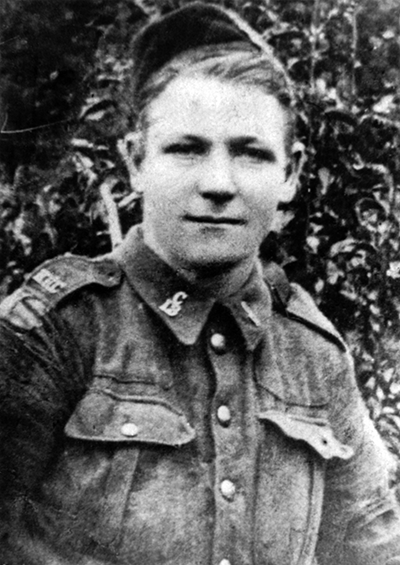 John Bernard Croak was born in Little Bay, Newfoundland on 18 May 1892. Four years later his family moved to Glace Bay, Nova Scotia in pursuit of work in Cape Breton’s coalmines. When the First World War came, Croak enlisted in the Canadian Expeditionary Force and served with the 13th Infantry Battalion. On 8 August 1918, at the beginning of the Allied offensive around Amiens in France, Private Croak became separated from his platoon during the advance. When he encountered a German machine gun position, he attacked it and captured both the machine gun and its crew. Subsequently wounded, he rejoined his platoon as it arrived at another enemy strongpoint. Dashing forward alone, Croak was almost immediately followed by the rest of his platoon in a charge that resulted in the capture of three machine guns and the survivors of the strong point’s garrison. In the course of this action, Private Croak was wounded a second time, and died a few minutes later.

For his actions on this occasion, Private Croak was awarded a posthumous Victoria Cross.

“For most conspicuous bravery in attack when having become separated from his section he encountered a machine-gun nest, which he bombed and silenced, taking the gun and crew prisoners. Shortly afterwards he was severely wounded, but refused to desist.

Having rejoined his platoon, a very strong point, containing several machine guns, was encountered. Private Croak, however, seeing an opportunity, dashed forward alone and was almost immediately followed by the remainder of the platoon in a brilliant charge. He was the first to arrive at the trench line, into which he led his men, capturing three machine guns and bayoneting or capturing the entire garrison.

The perseverance and valour of this gallant soldier, who was again severely wounded, and died of his wounds, were an inspiring example to all.”