As stated in the following London Gazette citation, John Chipman Kerr is a recipient of the Victoria Cross. This medal is awarded for the most conspicuous bravery, a daring or pre-eminent act of valour, or self-sacrifice or extreme devotion to duty in the presence of the enemy. 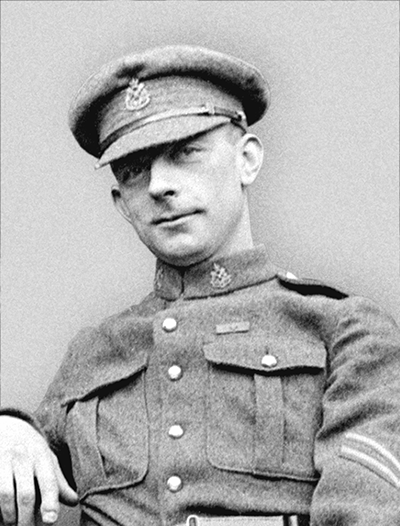 John Chipman Kerr was born in Fox River, Nova Scotia, on 11 January 1887. He served with the 49th Infantry Battalion, Canadian Expeditionary Force in the First World War. Kerr earned the Victoria Cross near Courcelette in France on 16 September 1916 during the latter stages of the Battle of the Somme. As first bayonet man in a bombing party advancing to attack German positions with hand grenades, he was 30 metres ahead of his comrades when he found himself exchanging grenades with the enemy. Although wounded, Kerr continued forward and compelled 62 of the enemy to surrender. At the beginning of the Second World War, Kerr joined the Army once more, later transferring to the Royal Canadian Air Force. He died in Port Moody, British Columbia on 19 February 1963. In 1951, a 2,600-metre peak in the Rocky Mountains was named after him.

“For most conspicuous bravery. During a bombing attack he was acting as bayonet man, and, knowing that bombs were running short, he ran along the parados under heavy fire until he was in close contact with the enemy, when he opened fire on them at point-blank range, and inflicted heavy loss.

The enemy, thinking they were surrounded, surrendered. Sixty-two prisoners were taken and 250 yards of enemy trench captured.

Before carrying out this very plucky act one of Private Kerr’s fingers had been blown off by a bomb.

Later, with two other men, he escorted back the prisoners under fire, and then returned to report himself for duty before having his wound dressed.”