As stated in the following London Gazette citation, John Francis Young is a recipient of the Victoria Cross. This medal is awarded for the most conspicuous bravery, a daring or pre-eminent act of valour, or self-sacrifice or extreme devotion to duty in the presence of the enemy. 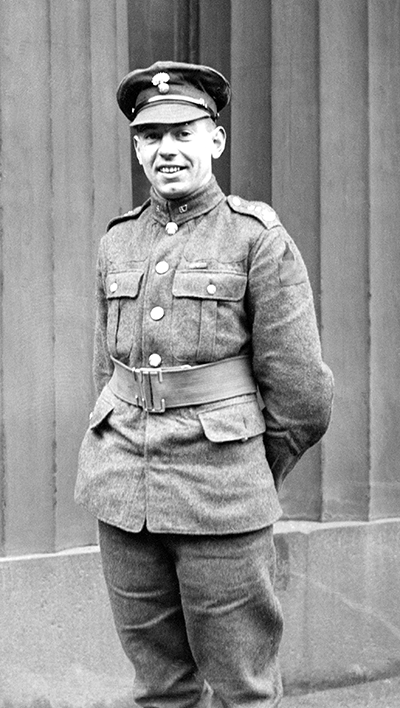 John Francis Young was born in Kidderminster, England on 14 January 1893, and is believed to have come to Canada as a young man. When the First World War began, he enlisted in the 87th Infantry Battalion, Canadian Expeditionary Force, serving as a stretcher-bearer.

Private Young was awarded the Victoria Cross for his conduct on 2 September 1918 during the fighting for the Drocourt-Quéant Line, near Dury in France. On that day, his company suffered heavy casualties from German shell- and machine gun fire. Young went out to treat the wounded despite the complete absence of any cover. When he ran out of dressings, he went back to his company headquarters for more medical supplies and then returned to his task, all the while under enemy fire. Later, when the German fire had slackened somewhat, Young organized and led stretcher parties to bring in the wounded men he had treated. Private Young’s courage throughout this action resulted in many lives being saved.

“For most conspicuous bravery and devotion to duty in attack at Dury-Arras sector on the 2nd September, 1918, when acting as a stretcher-bearer attached to ‘D’ Company of the 87th Bn., Quebec Regiment.

This company in the advance over the ridge suffered heavy casualties from shell and machine-gun fire.

Pte. Young, in spite of the complete absence of cover, without the least hesitation went out, and in the open fire-swept ground dressed the wounded. Having exhausted his stock of dressings, on more than one occasion he returned, under intense fire, to his company headquarters for a further supply. This work he continued for over an hour, displaying throughout the most absolute fearlessness.

To his courageous conduct must be ascribed the saving of the lives of many of his comrades.

Later, when the fire had somewhat slackened, he organised and led stretcher parties to bring in the wounded whom he had dressed.

All through the operations of 2nd, 3rd, and 4th September Pte. Young continued to show the greatest valour and devotion to duty.”