As stated in the following London Gazette citation, John Robert Osborn is a recipient of the Victoria Cross. This medal is awarded for the most conspicuous bravery, a daring or pre-eminent act of valour, or self-sacrifice or extreme devotion to duty in the presence of the enemy. 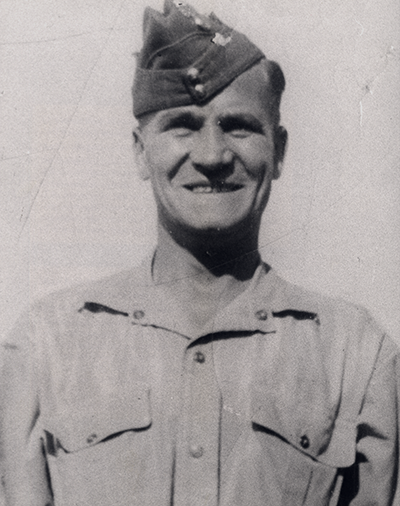 John Robert Osborn was born in Foulden, England on 2 January 1899. During the First World War, he served in the Royal Naval Volunteer Reserve. Osborn came to Canada in 1920. In 1933, he joined The Winnipeg Grenadiers, a unit of the Non-Permanent Active Militia. When the Second World War began in September 1939, the Grenadiers went on active service and were stationed for a time in Jamaica. In October 1941, at the request of the British Government, the battalion was sent to reinforce the garrison in Hong Kong.

On 8 December 1941, units of the Japanese Army moved against British defences in Hong Kong. By 18 December, three Japanese regiments had landed on the Island. Very early on the morning of 19 December, “A” Company of the Winnipeg Grenadiers was ordered to clear the enemy out of a feature named Jardine’s Lookout, and then to advance on Mount Butler and recapture it. Soon after dawn, part of “A” Company led by Company Sergeant-Major Osborne mounted a bayonet charge and took the summit of Mount Butler. Three hours later, when three companies of Japanese troops counterattacked and forced his men down the western slope of the hill, Osborne calmly directed covering fire to keep the enemy at bay. At length, after Osborne’s party had rejoined the rest of “A” Company, the Japanese managed to surround the whole group. By mid-afternoon, having driven off two Japanese attacks and with ammunition running low and casualties mounting, the company commander, Major A.B. Gresham, decided to surrender and stepped out into the open with a white flag. He was immediately shot dead by the Japanese, who now began to throw grenades into “A” Company’s position. CSM Osborne picked up several of the grenades and returned them to the enemy. Finally, a grenade fell in a place where Osborne could not retrieve it in time. Shouting a warning as he shoved one man aside, he threw himself on the grenade, which exploded and killed him instantly.

When the story of CSM Osborn’s leadership and sacrifice became known after the defeat of Japan, he was awarded the Victoria Cross.

During the afternoon the Company was cut off from the Battalion and completely surrounded by the enemy who were able to approach to within grenade throwing distance of the slight depression which the Company were holding. Several enemy grenades were thrown which Company-Sergeant-Major Osborn picked up and threw back. The enemy threw a grenade which landed in a position where it was impossible to pick it up and return it in time. Shouting a warning to his comrades this gallant Warrant Officer threw himself on the grenade which exploded killing him instantly. His self-sacrifice undoubtedly saved the lives of many others.

Company-Sergeant-Major Osborn was an inspiring example to all throughout the defence which he assisted so magnificently in maintaining against an overwhelming enemy force for over eight and a half hours, and in his death he displayed the highest qualities of heroism and self-sacrifice.”