As stated in the following London Gazette citation, Joseph Thomas Kaeble is a recipient of the Victoria Cross. This medal is awarded for the most conspicuous bravery, a daring or pre-eminent act of valour, or self-sacrifice or extreme devotion to duty in the presence of the enemy. 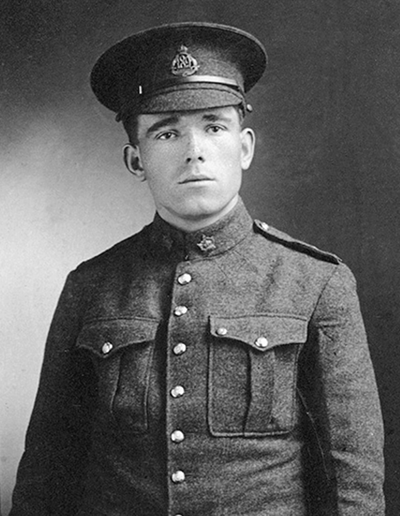 Joseph Thomas Kaeble was born in St-Moïse, Quebec on 5 May 1893. Before he enlisted in the 22nd Infantry Battalion, Canadian Expeditionary Force during the First World War, he earned his living as a mechanic.

Corporal Kaeble was awarded the Victoria Cross posthumously for demonstrating singular bravery on 8 and 9 June 1918. He was in charge of a machine gun section in the Canadian line near Neuville-Vitasse, near Arras in France, when an intense bombardment fell on the trenches heralding a strong enemy raid. By the time the shells stopped falling, all of his section but one were casualties. Seeing some fifty Germans advancing toward his position, Kaeble jumped over the parapet of his trench firing a Lewis machine gun at the approaching enemy. Although repeatedly struck, Corporal Kaeble continued to empty one magazine after another into the attackers until he fell back into the trench mortally wounded, dying shortly afterward. The repulse of the enemy raid at this point was due to his courage.

“For most conspicuous bravery and extraordinary devotion to duty when in charge of a Lewis gun section in the front line trenches, on which a strong enemy raid was attempted.

During an intense bombardment Cpl. Kaeble remained at the parapet with his Lewis gun shouldered ready for action, the field of fire being very short. As soon as the barrage lifted from the front line, about fifty of the enemy advanced towards his post. By this time the whole of his section except one had become casualties. Cpl. Kaeble jumped over the parapet, and holding his Lewis gun at the hip, emptied one magazine after another into the advancing enemy, and, although wounded several times by fragments of shells and bombs, he continued to fire, and entirely blocked the enemy by his determined stand. Finally, firing all the time, he fell backwards into the trench, mortally wounded. While lying on his back in the trench he fired his last cartridges over the parapet at the retreating Germans, and before losing consciousness shouted to the wounded about him: ‘Keep it up boys; do not let them get through! We must stop them!” The complete repulse of the enemy attack at this point was due to the remarkable personal bravery and self-sacrifice of this gallant non-commissioned officer, who died of his wounds shortly afterwards.”