As stated in the following London Gazette citation, Michael James O’Rourke is a recipient of the Victoria Cross. This medal is awarded for the most conspicuous bravery, a daring or pre-eminent act of valour, or self-sacrifice or extreme devotion to duty in the presence of the enemy. 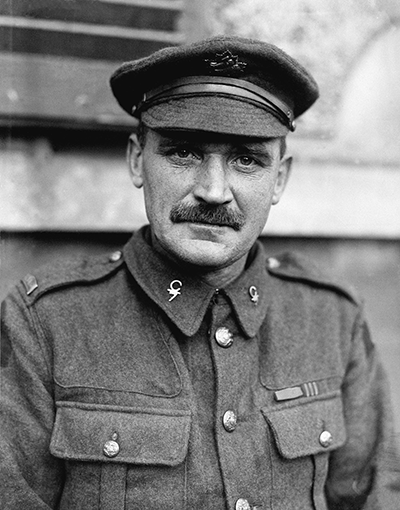 Michael James O’Rourke was born on 19 March 1878 in Limerick, Ireland. After the First World War began, he enlisted in the Canadian Expeditionary Force as a stretcher-bearer, and served with the 7th Infantry Battalion. O’Rourke received the Military Medal for his conduct in the Battle of the Somme in 1916.

O’Rourke earned the Victoria Cross for his courage and devotion to his comrades over a three-day period, from 15 to 17 August 1917, during the fighting for Hill 70, near Lens in France. Despite severe German shelling and machine gun and rifle fire, he worked unceasingly to bring the wounded to safety, to treat their injuries, and to obtain food and water for them. On several occasions, O’Rourke was knocked down and partially buried by explosions from enemy shells. At least three times he exposed himself recklessly to enemy fire in order to retrieve wounded men. The first time, O’Rourke jumped out of his trench in full view of German snipers to bring a soldier who had been blinded to safety. He left his trench on two other occasions in the face of heavy enemy machine gun fire and rescued two other wounded comrades.

“For most conspicuous bravery and devotion to duty during prolonged operations.

For three days and nights Pte. O’Rourke, who is a stretcher-bearer, worked unceasingly in bringing the wounded into safety, dressing them, and getting them food and water.

During the whole of his period the area in which he worked was subjected to very severe shelling and swept by heavy machine gun and rifle fire. On several occasions he was knocked down and partially buried by enemy shells. Seeing a comrade who had been blinded stumbling around ahead of our trench, in full view of the enemy who were sniping him, Pte. O’Rourke jumped out of his trench and brought the man back, being himself heavily sniped at while doing so. Again he went forward about 50 yards in front of our barrage under very heavy and accurate fire from enemy machine guns and snipers, and brought in a comrade. On a subsequent occasion, when the line of advanced posts was retired to the line to be consolidated, he went forward under very heavy enemy fire of every description and brought back a wounded man who had been left behind.

He showed throughout an absolute disregard for his own safety, going wherever there were wounded to succour, and his magnificent courage and devotion in continuing his rescue work, in spite of exhaustion and the incessant heavy enemy fire of every description, inspired all ranks and undoubtedly saved many lives.”