As stated in the following London Gazette citation, Richard Ernest William Turner is a recipient of the Victoria Cross. This medal is awarded for the most conspicuous bravery, a daring or pre-eminent act of valour, or self-sacrifice or extreme devotion to duty in the presence of the enemy. 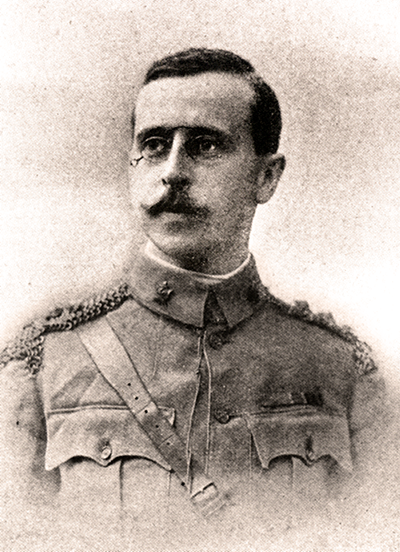 Richard Ernest William Turner was born on 25 July 1871 in Quebec City, Quebec. When the South African War began in 1899, he was a second lieutenant in the Militia and immediately joined The Royal Canadian Dragoons. As well as the Victoria Cross, Turner received the Distinguished Service Order for his service during the conflict.

On 7 November 1900, at Liliefontein, near the Komati River, a large force of Boer commandos sought to encircle a retreating British column whose rearguard comprised two troops of Royal Canadian Dragoons and two 12-pounder guns of “D” Battery, Royal Canadian Field Artillery. While commanding one of the troops of the Dragoons, Turner had already been wounded, and was retiring in front of the strong Boer assault when he received word that “D” Battery’s guns were in danger of being captured. He positioned a dozen of his troopers to ambush the attacking enemy. The successful execution of the ambush saved the guns and earned the Victoria Cross for Turner, one of three awarded for separate incidents in this action Turner again served overseas with the Canadian Expeditionary Force during the First World War, commanding first the 3rd Infantry Brigade and later the 2nd Division. Eventually promoted to the rank of lieutenant-general, he commanded Canadian forces in Britain, before becoming Chief of the General Staff, Overseas Military Forces of Canada. Turner died in Quebec City, Quebec, on 19 June 1961.

“Later in the day when the Boers again seriously threatened to capture the guns, Lieutenant Turner, although twice previously wounded, dismounted and deployed his men at close quarters and drove off the Boers, thus saving the guns.”