As stated in the following London Gazette citation, Samuel Lewis Honey is a recipient of the Victoria Cross. This medal is awarded for the most conspicuous bravery, a daring or pre-eminent act of valour, or self-sacrifice or extreme devotion to duty in the presence of the enemy. 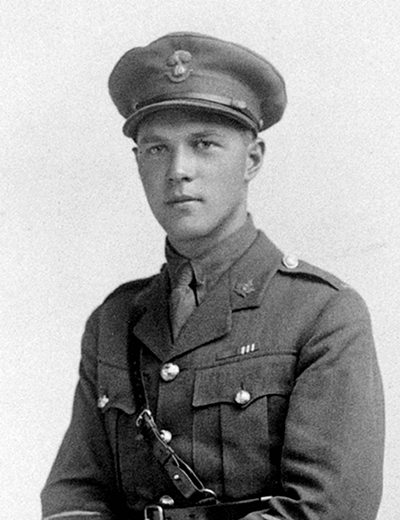 Samuel Lewis Honey was born in Conn, Ontario on 9 February 1894. Late in January 1915 he enlisted as a private soldier in the Canadian Expeditionary Force. Honey received the Military Medal early in 1917, and then the Distinguished Conduct Medal for his actions in the attack on Vimy Ridge by the Canadian Corps in April of the same year. He was subsequently commissioned as an officer and served with the 78th Infantry Battalion.

Lieutenant Honey was awarded the Victoria Cross for his exemplary conduct during offensive operations at Bourlon Wood in France from 27 to 30 September 1918. Taking command of his company after all the other officers had become casualties, he skilfully reorganized the advance while under heavy German fire and gained his objective. When his company began to suffer casualties from enfilading machine gun fire, Honey located the guns and, alone, attacked them and took ten of the enemy prisoner. Honey and his company consolidated the position they had captured, and subsequently repelled four German counterattacks. Later, after making a solitary reconnaissance at night to find an enemy post, he returned with a party of his men and captured it. 29 September again found him leading his company against a strong German position. Lieutenant Honey died on 30 September of wounds suffered on that day.

“For most conspicuous bravery during the Bourlon Wood operations, 27th September to 2nd October, 1918.

On 27th September, when his company commander and all other officers of his company had become casualties, Lt. Honey took command and skilfully reorganised under very severe fire. He continued the advance with great dash and gained the objective. Then finding that his company was suffering casualties from enfilade machine-gun fire he located the machine-gun nest and rushed it single-handed, capturing the guns and ten prisoners.

Subsequently he repelled four enemy counter-attacks and after dark again went out alone, and having located an enemy post, led a party which captured the post and three guns.

On the 29th September he led his company against a strong enemy position with great skill and daring and continued in the succeeding days of the battle to display the same high example of valour and self-sacrifice. He died of wounds received during the last day of the attack by his battalion.”