As stated in the following London Gazette citation, Thomas Ricketts is a recipient of the Victoria Cross. This medal is awarded for the most conspicuous bravery, a daring or pre-eminent act of valour, or self-sacrifice or extreme devotion to duty in the presence of the enemy. 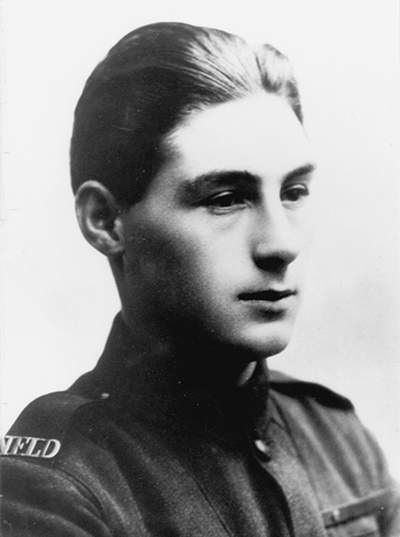 Thomas Ricketts was born in Middle Arm, Newfoundland on 15 April 1901. When he volunteered for service with the 1st Battalion, The Royal Newfoundland Regiment in September 1916, he was only 15 years old. However, Ricketts gave his age as 18, and was accepted.

In fact, Private Ricketts had still not celebrated his 18th birthday when he earned the Victoria Cross on 14 October 1918 near Ledeghem in Belgium. The advance of the 1st Battalion was being delayed by a German battery firing at close range, resulting in severe casualties for the Newfoundlanders. Ricketts, who was serving in a Lewis machine gun detachment, offered to go with his section commander and a Lewis gun to outflank the battery. The two moved forward toward the battery’s flank by short rushes, but their ammunition was exhausted while they were still about 300 metres from the German position. Under heavy machine gun fire, Ricketts doubled back 100 metres to get more ammunition, and returned with it to his Lewis gun. His accurate fire from the flank drove many of the enemy soldiers to abandon the heavy weapons in their positions and seek the protection of a nearby farm. Private Ricketts’s platoon then advanced and captured the four field guns in the battery, four machine guns supporting the position, and eight prisoners.

“For most conspicuous bravery and devotion to duty on the 14th October, 1918, during the advance from Ledeghem, when the attack was temporarily held up by heavy hostile fire and the platoon to which he belonged suffered severe casualties from the fire of a battery at point-blank range.

Pte. Ricketts at once volunteered to go forward with his section commander and a Lewis gun to attempt to outflank the battery. Advancing by short rushes under heavy fire from enemy machine guns with the hostile battery, their ammunition was exhausted when still 300 yards from the battery. The enemy, seeing an opportunity to get their field guns away, began to bring up their gun teams. Pte. Ricketts, at once realising the situation, doubled back 100 yards under the heaviest machine-gun fire, procured further ammunition, and dashed back again to the Lewis gun, and by very accurate fire drove the enemy and the gun teams into a farm.

His platoon then advanced without casualties, and captured the four field guns, four machine guns, and eight prisoners.

A fifth field gun was subsequently intercepted by fire and captured.

By his presence of mind in anticipating the enemy intention and his utter disregard of personal safety, Pte. Ricketts secured the further supply of ammunition which directly resulted in these important captures and undoubtedly saved many lives.”