As stated in the following London Gazette citation, Wallace Lloyd Algie is a recipient of the Victoria Cross. This medal is awarded for the most conspicuous bravery, a daring or pre-eminent act of valour, or self-sacrifice or extreme devotion to duty in the presence of the enemy. 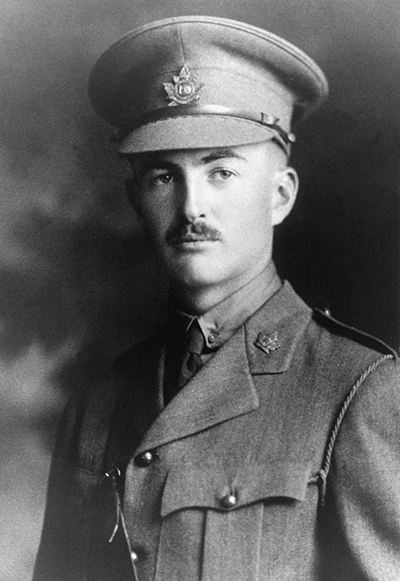 Wallace Lloyd Algie was born on 10 June 1891 in Alton, Ontario. In April 1916 he enlisted in the 20th Infantry Battalion, Canadian Expeditionary Force. Lieutenant Algie was awarded the Victoria Cross for his conduct on 11 October 1918 during the final day of the advance to Cambrai, France by the Canadian Corps. When his troops came under heavy machine gun fire from a nearby village, Algie rushed forward with nine men and disabled the crew of one machine gun, and then turned it on the enemy. Continuing to advance into the village with his party, he attacked a second machine gun, killed its crew, and captured an officer and ten men, thereby clearing the eastern end of the village. Lieutenant Algie was killed later that day while returning to the village with reinforcements.

“For most conspicuous bravery and self-sacrifice on the 11th October, 1918, north-east of Cambrai, when with attacking troops which came under heavy enfilade machine-gun fire from a neighbouring village.

Rushing forward with nine volunteers, he shot the crew of an enemy machine gun, and, turning it on the enemy, enabled his party to reach the village. He then rushed another machine gun, killed the crew, captured an officer and 10 enemy, and thereby cleared the end of the village.

Lt. Algie, having established his party, went back for reinforcements, but was killed when leading them forward. His valour and personal initiative in the face of intense fire saved many lives and enabled the position to be held.”