As stated in the following London Gazette citation, William Henry Metcalf is a recipient of the Victoria Cross. This medal is awarded for the most conspicuous bravery, a daring or pre-eminent act of valour, or self-sacrifice or extreme devotion to duty in the presence of the enemy. 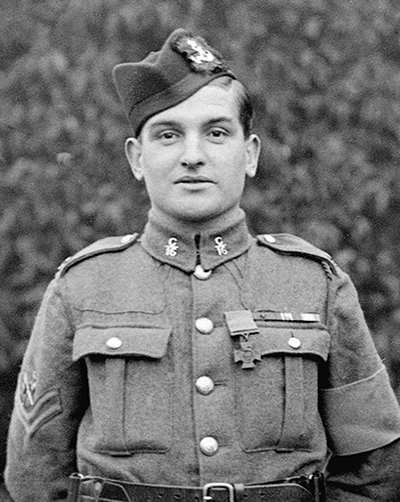 William Henry Metcalf was born in Waite Township, United States on 29 January 1885. When the First World War began, he immediately came to Canada from the United States and enlisted in the Canadian Expeditionary Force, eventually serving in the 16th Infantry Battalion. Metcalf received the Military Medal in 1916 for his part in the fighting during the Battle of the Somme.

Lance-Corporal Metcalf earned the Victoria Cross on 2 September 1918 near Cagnicourt in France during the Second Battle of Arras. On that day, the right flank of an attack by his battalion on a German trench was being held up by heavy resistance. Having assessed the situation, Metcalf hurried forward under intense machine gun fire to contact a tank passing to his left. Using a signal flag, he walked in front of the tank and directed it along the length of the enemy trench. As the tank fired down into the German trench, the machine gun positions were eliminated and heavy casualties inflicted on the enemy defenders. Though he was wounded in this action, Lance-Corporal Metcalf continued to advance until he was ordered out of the firing line to have his wound treated.

“For most conspicuous bravery, initiative and devotion to duty in attack, when, the right flank of the battalion being held up, he realised the situation and rushed forward under intense machine-gun fire to a passing Tank on the left. With his signal flag he walked in front of the Tank, directing it along the trench in a perfect hail of bullets and bombs. The machine-gun strong points were overcome, very heavy casualties were inflicted on the enemy, and a very critical situation was relieved.

Later, although wounded, he continued to advance until ordered to get into a shell hole and have his wounds dressed.

His valour throughout was of the highest standard.”