As stated in the following London Gazette citation, William Merrifield is a recipient of the Victoria Cross. This medal is awarded for the most conspicuous bravery, a daring or pre-eminent act of valour, or self-sacrifice or extreme devotion to duty in the presence of the enemy. 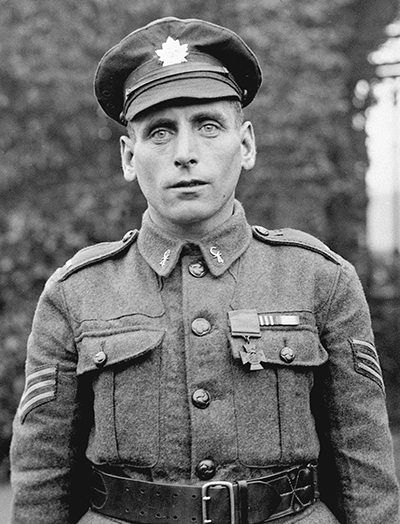 William Merrifield was born in Brentwood, England on 9 October 1890, and later came to Canada. During the First World War he enlisted with the Canadian Expeditionary Force, and served with the 4th Infantry Battalion. Merrifield received the Military Medal for his conduct near Passchendaele in Belgium on 6 and 7 November 1917.

On 1 October 1918, the advance of Sergeant Merrifield and his men near Abancourt in France was being blocked by intense fire from two German machine gun emplacements. Merrifield resolved to attack both positions alone. Running from shell-hole to shell-hole, he killed the crew of the first machine gun and, although wounded, continued to the second emplacement, where he used a hand grenade to kill all of the enemy defenders. Merrifield refused to be evacuated, and went on leading his platoon until he was wounded again, this time severely. For showing “the highest qualities of valour and leadership” in this action, Sergeant Merrifield was awarded the Victoria Cross.

“For most conspicuous bravery and devotion to duty during the attack near Abancourt on the 1st October, 1918. When his men were held up by an intense fire from two machine-gun emplacements, he attacked them both single-handed. Dashing from shell-hole to shell-hole he killed the occupants of the first post, and, although wounded, continued to attack the second post, and with a bomb killed the occupants. He refused to be evacuated, and led his platoon until again severely wounded.

Sjt. Merrifield has served with exceptional distinction on many former occasions, and throughout the action of the 1st October showed the highest qualities of valour and leadership.”